Consider that profits are a pretty constant portion of GDP, around 10%: 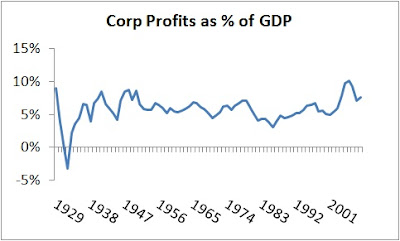 Now, as Jeremy Siegal notes, you can have higher-than-GDP earnings per share growth in stocks if companies continually repurchase shares, but here's a graph from Barry Ritholz on the valuation of the market relative to our GDP over time: it's gone up, but it can't go up forever.

If valuations stay about the same portion of GDP, the average return to a dollar invested is capped by the growth rate of earnings. Remember that these profits are then used for dividends and buybacks.

Fama and French argued that the US 1950-2000 period that is so prominent in academic minds was truly anomalous:

This means, the second half of the 20th century was abnormal, even with hindsight looking at dividends and earnings. Expecting greater than 3% real returns out of stocks relies on a lot of hope.

Then again, you can take the view of Jay Ritter, who notes very little correlation between equity returns and GDP growth cross-sectionally, looking at data from 16 countries over 100 years: 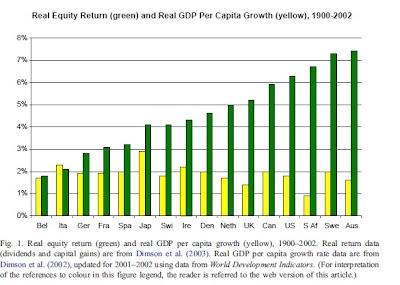 As an empirical matter, knowing a country's GDP growth is a pretty lame indicator of even its long run stock market return. Valuation (P/E fluctuations), the fraction of corporate profits paid out to shareholders, and the probability of catastrophic loss due to hyperinflation, revolution, war, are all very important in these 100 year samples.

But ultimately, a 3% top-line return seems the most reasonable equity premium estimate, and the return to shareholders will probably be below that due to transaction costs and adverse timing. The 5.5% return bandied about is a bias from a very biased sample--the US post WW2--not representative of general experience.
Posted by Eric Falkenstein at 4:36 PM

I agree that post WW2 is not representative. But real returns in that period were well above 5.5%. If real returns on stocks going forward are 5%, that will already represent a large drop.

Why do you think returns will fall all the way to 3%? Dividend yields alone are around 2%. Do you really think long run dividend-per-share growth will be as low as 1%, even with share repurchases and GDP growth? I don't see it...please explain.

That corp profits graph looks a lot closer to 7% of GDP than 10%.

If you're going to compare the purported "real equity growth rate" to the "equity risk estimate" (and "real returns" and "top-line return")I think you should explicitly note their definitions.

Also, with an increased share of S&P500 (amongst other indices) profits coming from outside the U.S., the comparison of corporate profits to U.S. GDP might not be expected to be stable over time.

Your guess about growth rates is as good as any. There is no answer that makes sense.

That is what $1 would be worth today if it were actually possible to compound, long-term

What risk premium stories seem to miss, as well as growth rate stories, is that over time it is really hard to hold on to assets.

Ultimately if you have a lot of assets someone takes it away.