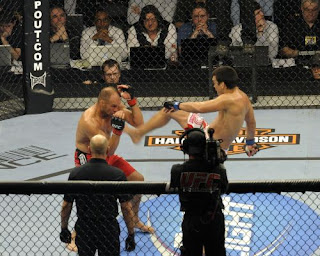 For the second time in two months, a front kick to the face ended a major UFC fight. This time, it was Lyoto Machida delivering to Randy Couture, whereas previously it was Anderson Silva delivering on Vito Belfort. Machida and Silva are good friends, and both gave credit to action film star Steven Seagal, so I guess he truly deserves credit. It's pretty devastating because the defender is watching his opponents hands, and the kick comes straight up between one's hands. A good shot to the chin is like hitting the power switch on your computer.
Posted by Eric Falkenstein at 11:50 AM

Neat to watch the evolution of the sport. We are seeing techniques that we once thought were powerful, but fell out of favor, resurface as fighters become more complete. The front kick is a good example. It leaves you very open to a takedown but as fighters become more capable of countering the wrestling game, it opens up opportunities for techniques that were abandoned. (I just hate seeing Seagal get credit...although, I like his movies!).

Basic Training said...
This comment has been removed by the author.
12:27 PM

vitor. and the kick was sick.

It's probably a good guess that Anderson has been working on front kicks before Mr. Segal was on the scene. Machida the same. Good story/ PR helps everyone. A great finish in any case.

"This video is no longer available due to a copyright claim by ZUFFA, LLC."

Of course it was Anderson Silva vs. Vito Belfort not Anderseon Silva vs. Shogun Rua (Rua was beaten by Jon Jones).
Surprised to see Macroeconomics and UFC on the same page...