A working paper on currency risk, Common Risk Factors in Currency Markets, highlights the inanity of current academic asset pricing. The authors (Hanno Lustig, Nick Roussanov, and Adrien Verdelha), say they find risk premia in currency markets that are ‘large and time varying’. The search for risk is the snipe hunt of Business School professors, something they talk about all the time, but their students never see directly. As beta is negatively correlated with returns in equities, one would think, wow, finally, a risk-return nexus that proves all that mean-variance analysis you learn in B-school isn't total bullshit.

But the bottom line is the following scatter plot, which seems to show a nice correlation between risk on the x axis, and return on the y axis. 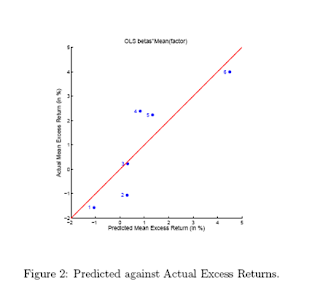 But, alas, that interpretation would be far too charitable. Here’s the trick: risk is defined by the return, which is then used to 'explain' returns.

Absurd! But the nattering nabobs of nihilistic empiricism say their approach is not a tautology, because, in theory, with a large number of assets, an asset merely being correlated with the return of a proxy portfolio is not necessarily referring to itself. Not necessarily, but in practice, it is, because there are so few assets. In this paper's case, you have only 15 developed countries, hardly a large sample. Further, many of these countries being very correlated due to economic entanglements (eg, Belgium, the Netherlands and Denmark). So the sample is quite small. In effect, instead of having 15 ‘different’ currencies, you really only have 5 after you adjust for the implicit correlation.

Anyway, with 5 countries, one risk factor is the average return of currencies against the dollar. Well, when the dollar is strong, all these currencies depreciate, and when it is weak, they appreciate, on average. It appears that because of trending in the dollar, you can predict that a currency correlated with the average currency vis-à-vis the dollar based on this factor. In other words, if you want to predict the yen, and the yen has been appreciating against the dollar, bet on it continuing. That is momentum.

The real question is, in what way is having a high expected return, based on a currency’s momentum and interest rate, risky? In the good old days we had a simple reason, because it was volatile. Then, with Markowitz, we said, because it was correlated with the S&P500 (a broad market, excluding diversifiable risk). Then, with the Roll critique, we said the ‘market portfolio’, which includes real estate, bonds, etc. Then, we tried the APT and ICAPM, which suggested things correlated with aggregate wealth like industrial production, labor earnings, the price of oil. We tried ‘latent’ factor models, which were statistical constructs that explain portfolio variance. None of these worked.

Then, Eugene Fama decided to embrace the anomalies. If you can’t explain the size and value anomalies, just call them risk factors, and hope no one notices how completely circular your reasoning is. Now, logically, it could be true that size and value, or the carry trade, or dollar momentum, are truly risk factors. But if that were true, one would expect these risk factors to have some generality, so that, say, a set of risk factors used to explain, say, equities, would be applicable towards currencies and vice versa. But no. ‘risk factors’ are very parochial, and only explain the particular asset under examination, which is why I think they are not risk factors, but merely a clever attempt to relabel the most conspicuous return characteristic within an asset class as ‘risk’ because by assumption risk and return are positively correlated.

Modern asset pricing theory is a sham. It explains returns based risk, which is based on returns of those very same assets.
Posted by Eric Falkenstein at 8:43 PM

Eric, I haven't had a chance to read the whole thing yet, but I am curious about your opinion on this paper:

Since there has been a fair amount of research suggesting that low beta stocks have higher returns than high beta, my initial reaction to the authors' idea of leveraging up one's retirement fund is very skeptical. Conceptually, a long enough time horizon should see leverage pay off, but that's assuming there's never a drawdown so big it results in a vaporizing margin call.

Could be so, but I imagine it falls prey to the Samuelson critique of maximizing the log of wealth, which also generates a higher expected return. The key is, this result only holds if your objective is to maximize wealth, a seemingly obvious objective. But back in the 1970s there was this big debate, and if your objective function is not Log(W), but rather something more general, these strategies are irrational. See
http://www-stat.wharton.upenn.edu/~steele/Courses/434/434Context/Kelly%20Resources/Samuelson1979.pdf

Eric,
You make a very interesting point. Maybe you could clear up some confusion, if the size is equal to price times shares outstanding and you sort based on size, then wouldn't it be that the past returns determine risk (size) which determine future returns under Fama-French? Under my understanding, as long as you are using the past returns to develop your factor loadings, then it shouldn't be a problem using them to explain future returns (except for using data mining as a proxy for theory). Where is my understanding mistaken?

Also, in regards to your above comment, Fortune's Formula goes into the debate on maximizing the log wealth (though it is on the side of the Kelly criterion than Samuelson). And the link that you posted was cut off for me. Maybe if you could post it with html tags.

As per past return, this is true, but momentum itself is sometimes used as a 'factor' (in the Cahart 4-factor model). The key is, we know the anomalies: size, value, momentum. Using these 'factors', to then explain stocks sorted on these factors is circular.

wow, was samuelson on 70's hash when he wrote that? guess everyone was a poet then..

bond investor, if we lived 94 lives like the cohorts in that paper, it would make sense, otherwise you could end up in the 'oh, s**t' bin w/o invalidating the paper's conclusions. and this assuming their interest rates/returns/dividends assumptions hold.