How to Make a Nobelist Squirm 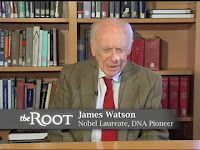 Henry Louis Gates, who, while of half European descent, considers him a spokesperson for Black America. Note how he questions James Watson in this interview

JW: Oh, Jewish intelligence, ah, the Irish will do all right. So I'm not particularly worried about the fact that we're not all the same. I'm really much more concerned with social justice, that everyone has a place in society. That's really what I'm concerned with. … If they find genes for all kinds of Jewish intelligence, I don't think it's going to affect me in the slightest.
HLG: But would it affect me?
JW: Well, it shouldn't affect you. You're very successful.
HLG: I mean me, collectively. My people.

OK, he's successful, but he is using the imperial 'we' when discussing potential adverse effects of saying Jews are intelligent.

JW: I was watching the basketball games yesterday. And I'm just trying to say, you dominate.
HLG: Oh, you mean black people?
JW: Yes.
HLG: In case you haven't noticed, I'm not exactly a basketball kind of type...I can't run. It's a good thing I was a good student because I wouldn't have made it.

So, he represents 'Black America' selectively. He baits Watson into treating him as the spokesman for Black people, but then takes the first chance he gets to note generalizations are not always true (who knew?).

I take offense at the fact that I can't take offense. I'm, male, straight, nominally Protestant, now-atheist who doesn't believe in evolution, of European descent but neither a pan-European mutt nor a pure ethnic (parents only speak English). I'm part of the aggrieved group of people who do not belong to obvious groups.
Posted by Eric Falkenstein at 4:07 PM

That was a great catch, something struck me uncomfortably about the way he defended against "stereotyping".