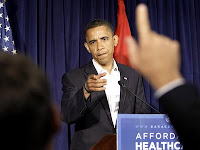 The main reason I vote Republican is because I think that in general, over time, they will spend less than Democrats. Clearly, Bush's Medicare, Iraq War, and No Child Left Behind, are good data points against this thought, but other than the Iraq War (big exception, to be sure), the Democrats want to spend more, not less. This nation needs more taxes like my kids need more candy.

Thus, when a candidate says he is going to raise taxes, given the natural incentives of the system, this means the sky's the limit, and spending will fill the gap like nature abhors a vacuum. And so Obama saying he is going to raise taxes right out of the shoot, I figure, this could be big trouble. Voters tend to sense this, as famously, when Walter Mondale made his acceptance speech at the 1984 Democratic Convention, Mondale said: "By the end of my first term, I will reduce the Reagan budget deficit by two-thirds. Let's tell the truth. It must be done, it must be done. Mr. Reagan will raise taxes, and so will I. He won't tell you. I just did." While this was meant to show that Mondale would be honest with voters, it was largely interpreted as a campaign pledge to raise taxes, and Reagan destroyed Mondale in the fall election.

Conservatives have argued Obama is going to raise taxes, and Obama's defense? Not as much as you say, and more progressively. He would raise the 15% capital-gains tax on the income from sales of investments to about 20%. "my discussions with people like Warren Buffett indicate that it will probably not have any significant impact in terms of investment." As Buffett is 78, and has tens of billions of dollars, he could live insanely lavishly until he dies under the most insane tax regime, so I don't think his preferences are so relevant.

The Illinois senator said he would cut income taxes for 95% of American workers, meaning marginal tax rates will rise considerable on bigger earners. Progressive taxation is desirable to many people, as it would probably win a vote in the same way expropriating the wealthy always seems like a good idea when demagoguing. Whenever you rob Peter to pay Paul, you can always count on Paul’s support. The problem is that the more progressive the tax rate is, the more it skews investment decisions, leading to a missallocation of resources. I was at a presentation by Northern Trust, and the audience were investment advisers to the wealthy. Most were lawyers and tax specialists, as opposed to people who really knew investments. This makes sense because if you make a lot of money, taking advantage of the various tax breaks is the most important priority. It shouldn't be this way, you want investors thinking about whether to buy subprime, or get out, not whether the current tax break on ethanol, or muni bonds, will continue.

Obama says his plan to shore up Social Security by raising the level of taxable wages wouldn't affect 97% of taxpayers. Currently this rate is about 7.6%. Currently this tax stops at $97,000 per year, because presumably its not a tax, but an investment in a retirement fund. As outlays are capped, taxes above this can no longer be called an investment, but are laid bare as the taxes they are. Thus, if Obama installs this tax for income above $200k as he plans, this will merely highlight that social security taxes are not an investment, but a tax. That's a 7% marginal tax increase on the wealthy, more money down the DC rat hole.
Posted by Eric Falkenstein at 7:10 PM

By spending far in excess of revenues, and then cutting revenues further the republicans have indeed raised taxes. Not on you, but on your children and those yet to be born. You might call it the birth tax- every child born already owes thousands of dollars.

That is unless you believe the tax cuts made have spurred growth sufficient to pay for themselves. There isn't much evidence for such a theory.

If it wasn't for the insane tax policy strategy I might vote for Obama because I think the Iraq war is so stupidly expensive and damaging to our country and the world. I agree about the distortionary effects of increasing marginal tax rates on rich people, the vast majority of whom aren't *that* rich. But I actually worry more about tax cuts and increased redistribution directed towards the very low end of the pay scale - already there are so many disincentives for poor people to work harder or improve their situation: going from $25k to $35k income, for example, you lose Food Stamps, you lose Medicaid, you lose EITC, you lose rent assistance, you lose child care subsidies, plus you probably are expected to pay for some of your kids' college too.

I'm not arguing a supply side effect to pay for a tax decrease, mainly a 'starve the beast' argument. I know data on this is limited, but when your first concrete proposal is a tax increase, I think its reasonable to assume spending will rise more than someone who does not start with this policy.

off topic but priceless:
``We have conveyed to the U.S. government that a strong U.S. dollar is in the interest of the U.S. economy,'' Zhu Guangyao, an assistant minister at China's Finance Ministry said last week.

i love this game!

Obama's proposed raise in social security is either confused, as I think you suggest, or plain stupid. Since Social Security revenues are dedicated to social security benefits, raising revenue only raises benefit obligations (i.e. more entitlements!). Since no deficit is projected for decades, what does he propose doing with the glut of new Social Security revenue? Give it to old people now? What will happen is more of the same: congress borrows against the surplus and spends more.

So Obama will jointly increase entitlements and raise taxes, which is stupid beyond belief. If the fisc really requires more revenue, just raise income taxes and belay an increase in entitlements.

Under Barack Hussein Obama's plan, I will get to keep 36 cents for each additional dollar I make. I'm self employed so I see the 2x social security tax.

I'd stop working and live off my dividends, but he wants to raise those taxes too!

The "starve the beast" approach has failed miserably. Taxes are moot if we deal with its primary cause -- spending. It simply has to just stop or at the very minimum slow to trickle. Otherwise we're playing a shell game, stealing from future generations. Basically Paul stealing from his own kids and Peter's. The clear difference between Obama and McCain is war. One wants to get us out, which will save us trillions of dollars. We can at that point talk about tax cuts. The other wants to continue with a possible escalation with Iran. Where I was raised if you wanted something, you have to pay for it. That means more spent blood and treasure. No candidate is perfect, but IMHO I also don't believe the cost/benefit is there for these middle east wars.

To starve the beast, one has to have the courage and conviction to say that need is not a moral claim on another's wealth. And there's no politician or leading thinker alive now saying this.

I do remember when politicians tried to claim that social security was a payment for a benefit. Now they're getting desperate I guess, and are willing to drop the pretence that it wasn't a wealth transfer scheme from the very beginning. If they get away with the the unlimited social security tax, either my wife or I should retire.