There's an interesting video where several of the world's most esteemed monetary experts got together to honor ex Bank of England Governor Mervyn King, and in the process acknowledged they needed a financial mechanism that affects the general economy. They can't figure it out exactly, they just know finance is very important to the economy.

In the meantime, they continue countenance, if not encourage, the persecution of banks. Every quarter there's a new lawsuit brought against the banks. The latest news tonight is about the Libor scandal, which, surely needs punishment, but it's just getting old and the damages are unlimited, so banks are naturally wary. Can we fast track these things? Add to this that regulators are giving banks extra scrutiny for everything they do, and naturally most banks are afraid to lend. Thus, all this new money goes to high powered money that simply pulls in a little interest at the Fed.

Here's a set of relevant data. These are data from the bank index through Dec 2012, which I pulled from Ken French's website. It shows bank stocks at an all-time low at this stage after the last business cycle peak. Banks aren't lending because they are a political punching bag for populists, afraid of regulators and litigators. As Hyman Minsky used to say, you need rich banks.  We don't have them. With banks in their negative vega zone, they simply aren't incented to lend. Weak banks aren't a symptom of our weak recovery, but rather the cause. 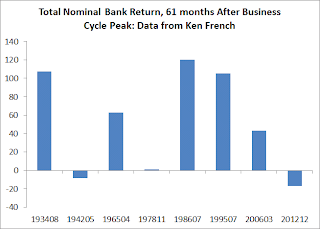 Of course it cannot be that investors have become aware of the moral hazard endemic to such institutions (especially the large systemically important ones) and basically do not trust the fed/regulators to do anything about it (JPM CIO being a perfect example) and thus require a much larger premium than previous cycles.

I would argue that when the US Attorney General declared big banks un-prosecutable, as he did earlier this month, an incentive structure was revealed that supersedes any/all others. And of course that is only one part of the holy trinity of perverse incentives that is TBTF, ZIRP and perpetual QE. The more rules, regs, programs and agencies are created the more big banks engage in complex, opaque and peripheral (to their core functions) schemes to make money to the particular detriment of those who need their traditional services most and to the larger economy in general.

Saving goes unrewarded, loans are not made, debt monetization gives a riskless profit center to banks and deposits are now ~zero cost capital that is almost certainly transformable (via repo/rehypothecation and physical relocation to reg-lite London) into dry powder for Volker-skirting prop (sorry, “hedge”) desks.

Plus, our big banks are simply too big to function the way banks should and have in the past. They are high-profile, concentrated targets for private lawsuits and harassment and their one-size-fits-all approach is the opposite of the smaller, community bank relationship models (which they now have huge cost advantages over) which thrived in the past. How many bankers are still alive at this point who have made actual, small business loans based on subjective judgments and human analysis as opposed to cookie-cutter algos and box checking?

[Is there a Blogger.com guide I can use augment my meager HTML skills? I can’t figure out how to create embedded links here.]

If you prick us do we not bleed.

the link is just

I typically create a hyperlink (in this type of context) using HTML code exactly as described on this site:

But when I attempt that here I get the error message:

Your HTML cannot be accepted: Reference " http:" is not allowed: A

just right click 'view page source' on a web post/comment, and look at the highlighted text. it has an 'a', and 'href', and carrots. Unfortunately, I don't know how to display it without it being a link.

No modern bank can withstand all its depositors asking for their "at call" funds simultaneously. This is known as a "bank run" but really it is nothing more than a group of people exercising the rights they have been promised.

Because of this, every bank is technically insolvent all the time, and this usually doesn't matter simply because most people don't fully exercise the rights they are entitled to. Murray Rothbard explains this in very small steps in "The case against the Fed" both in a theoretical context, and with the historic details of how the Fed was created to make it easier for banks to run at a higher leverage than would otherwise be possible.

Banks and governments have a special relationship, in that the creation of new money generally makes government spending easier. The Fed can guarantee low interest loans to government, thus preventing any real budgetary constraints from applying. Once upon a time, governments needed to plead with their citizens to buy bonds, but that is no longer the case.

Of course the fundamental physical principle applies that in order for one group of people to consume what they don't produce, some other group of people must produce what they don't consume. The way this washes through the financial system is via inflation (an implicit wealth tax) and via capital gains tax (an explicit wealth tax) or like Cyprus a direct haircut for depositors. The financial system cannot create resources, it can only move them around -- in the ideal case there is a gain by moving resources from less efficient to more efficient application.

We don't actually require banks for the purpose of lending. Alternative (more honest) structures are available, such as Lending Club, where people can buy shares in each other's mortgages. Lending Club does not make a promise of "at call" withdrawals, but I believe you can resell those shares at market value. The various stock markets also provide a mechanism for investment money, without offering an "at call" guarantee.