Though I have not the slightest itch to murder anyone, I do read some obituaries with pleasure. Hugo Chavez was a typical tyrant, and I would surely want to emigrate if I ever found myself in such a country.  Yet, many on the left disagree and point out the trains ran on time.  Salon has an article entitled "Hugo Chavez's economic miracle," and highlights that the official poverty rate fell during his tenure.  I'm skeptical of poverty statistics calculated in countries run by dictators, especially those countries where the murder rate is 4 times that of Mexico.  I guess we probably do not agree on the facts, but I also suspect we have different preferences. 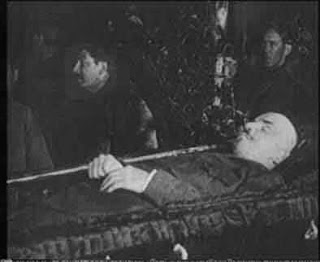 Luckily for them, Chavez is going to be embalmed like his hero Lenin, and I'm glad there's a shrine to people I disagree with so far away from me. I wish one of his Western cheerleaders wouldn't merely praise these guys, but actually move there. That is, if Cuba, Venezuela, China, or Albania is a socialist paradise, then why don't any of these guys actually want to live there.

I think the popularity of politicians like Chavez highlights why even libertarians should consider possible benefits of some redistributive federal policies. Even if you think growing inequality is fair, the reality is democracy is the least bad political system that we have. In a very unequal society it's hard to fault people for voting for populist policies even if they are ultimately harmful in the long run.

Do you really think that albania is still socialist? Where do you live, on the moon?You seem to have no knowledge about history and current happenings...

Not that it excuses Chavistas not moving to Venezuela, but reluctance to switch governance suppliers is pretty much a human universal: look at how many supporters of low tax and lean government have failed to change providers to one of the many on the market that offers just that.

I know, China and Albania are no longer socialist, but they were for decades and had great Western admirers, usually noting that the trains ran on time (according to government reports).

Some large degree of socialism on a national scale is not an unworkable model per se. As places like Scandinavia have shown, if you have a very homogenous, mono-cultural population and everyone is more or less on board with the reasonably transparent, measureable and accountable program then yeah, you can have your free child and medical care and maybe even an OK business environment. The trade-off is $30 gin & tonics and a much more Spartan lifestyle than most Americans can imagine.

The problem with places like Venezuela is that they don’t have anywhere near the same foundations and traditions of property rights and the rule of law to begin with (Hernando De Soto’s ‘Mystery of Capital’ is excellent on this) plus thugs like Chavez, to put it charitably, see everything in economics as a zero-sum game where arbitrary capital seizures and central planning are the keys to prosperity and justice.

It’s not surprising that rich liberals are in love with the narratives of celebrity based politics regardless of underlying reality. That’s just how they roll.

What are net migration rates? I imagine if people are trying to flee Venezuela, there's your litmus test.

But if Chavez curtails freedoms, then it would not be a meaningful statistic.

One less dictator for Dennis Rodman to visit.

Anonymous, the problem is that the redistribution is never enough. This is plain to see in US history of the last 80 years. Program after program is added and then expanded and each time it's argued that the need is a "basic human right". As soon as that program is in place, it's on to the next item on the wish list. It becomes a dictatorship not of one ruler, but of the majority (or several allied minorities).

About Venezuela's net emigration rates: About 50% of the middle class has left the country (including 50% of the members of the Jewish community). They sold their businesses before they were expropriated and/or were kidnapped. Venezuela has nothing to show for its enormous oil-export income.

I've met a lot of Venezuelans and Argentines here in Chile, and they all agree: socialism sucks.

Exactly right. And in most cases, the program is ineffective and corrupt, and ultimately exists just to provide "employment" for those that populate the halls of these dubious enterprises. The "poor", etc are not aided in the least, pawns in a liberal shell game masquerading as "caring and concern"

... then yeah, you can have your free child and medical care and maybe even an OK business environment. The trade-off is $30 gin & tonics and a much more Spartan lifestyle than most Americans can imagine.

What you are saying is the "free" child and medical care is not free at all, it actually costs quite a lot, but when everyone is forced to pay, they can't easily point to what they don't have... so that cost becomes hidden.

Tel - Of course, I tried to imply that in "The trade-off is $30 gin & tonics and a much more Spartan lifestyle than most Americans can

and a much more Spartan lifestyle than most Americans can imagine

Please substantiate that. We Europeans are fed up with these kind of preconceived ideas about how we live. And I'll subjectively substantiate my indignation: I've lived 13 years in the US so I do have some points of reference.