FX Carry Trade is Back 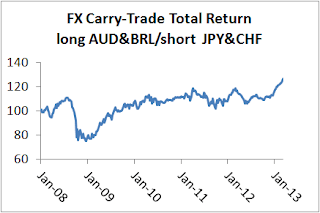 As one can see, this trade took a really big hit in 2008, but rebounded within a year unlike many other assets. However, since then it's been a boring trade. This year, however, it's been going gangbusters,so perhaps we are back to old times.
Posted by Eric Falkenstein at 8:38 PM

Note that the yen crashed at the same time that the Japan stock market took off like a rocket.

If you just looked at 2008-present you would have no trouble at all explaining the returns of the carry trade. It seems premature to declare that it's "back"...

“According to the uncovered interest rate parity, the Australian dollar should depreciate against the American dollar by approximately 2.8%.”

Over what time period? Instantly…or over some arbitrary length of time? Once you put a carry trade on you only care (aside from default risk) about the currency you’re long depreciating vs. the currency you’re short in excess of your borrow/lend spread. Even if the AUD does depreciate (in the above example) by the modeled 2.8% over some time period, you still make money if some of that depreciation happens on either side of your trade on/trade off window.

If the spread between borrowing for a year in USD and lending for a year in AUD is 2.8% and the AUD is depreciating vs. the USD at a steady, 2.8% per annum rate then there is nothing to exploit. But even then you could borrow short and lend long and in any case other market participants are doing different things all the time which means the two currencies aren’t going to move linearly vs. each other so I don’t know where this expectation of “parity” is coming from.

The real question it seems is why (if this is actually the case at any given time) does the cost of hedging (via puts, forwards etc) the carry trade not equal or exceed the interest rate spread? Shouldn’t market efficiency manifest itself in this area (on a case by case, trade by trade basis) instead of in the relationship between the two currencies which encompasses the sum total of all kinds of different transactions which may or may not mesh with your particular transaction?

The interest rate duration would dictate the period length for the currency move. Eichenbaum's paper sooks at augmenting this with puts.


These "Capital Flow Bonanza's," in Rogoff and Reinhart's terms, are prone to rapid reversals.

In "Carry Trades and Currency Crashes," Brunnermeier, Nagel, Pedersen (2009) document the negative skew in the carry trade strategy, it has "crash risk."

Fundamentally, the capital flows have created credit bubbles across a geographically wide variety of countries, across latin america, asia, and parts of western europe, like the Nordic countries.

If you look at the literature, among the best leading indicators of a currency crash is simply a rapid increase in the Real Exchange Rates over 5 or 10 years. This bodes ill for the Aussie, the Yen, and a dozen other curries.

Timing is difficult, but implied vol has picked up from very low levels - i have liked variance swaps and various bearish options strategies on Emerging Market currencies since past summer, so early - should the this vol continue to rise, it could be signaling trouble is amiss.

We conjecture that sudden exchange rate moves unrelated to news can be due to the unwinding of carry trades when speculators near funding constraints. This idea is consistent with our findings that

(i) investment currencies are subject to crash risk, that is, positive interest rate differentials are associated with negative conditional skewness of exchange rate movements;

(ii) the carry, that is, interest rate differential, is associated with positive speculator net positions in investment currencies;

(iv) carry trade losses increase the price of crash risk but lower speculator positions and the probability of a crash;

(v) an increase in global risk or risk aversion as measured by the VIX equity‐option implied volatility index coincides with reductions in speculator carry positions (unwind) and carry trade losses;

(vii) currencies with similar levels of interest rate comove with each other, controlling for other effects.

(viii) More generally, the crash risk we document in this paper may discourage speculators from taking on large enough positions to enforce UIP. Crash risk may thus help explain the empirically well‐documented violation of the UIP.