The Non-Linearity of Leadership Competence 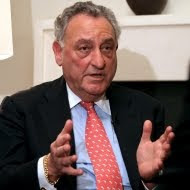 One of the more profound facts of life is nonlinearity.  From radiation to vitamins to things like politeness and honesty, optimality lies in some middle ground.  You can have too much or too little, which is what makes life non-trivial, because you always have to find that middle optimal point yourself, often by trial and error.  The optimal organization for a family is communist, but this doesn't generalize to large societies, a point that most leftists can't fathom.

The latest example is Sandy Weill, Jamie Dimon's mentor, stating that Glass-Steagall may be a good way to constrain the too-big-too-fail.  This regulation was totally irrevelant to the housing crisis, and the regulation was already impractical when it was repealed.  There was no difference between those banks with large investment banking operations and those without in the recent crisis, and in the quiet 1935-2005 period Europe had nothing like Glass-Steagall without adverse consequence.  It's a red herring.  The key is simply the size of financial institutions, which at a certain level become politicized.  Eliminating Glass-Steagall would just prevent efficient economies of scope.

How could Weill be so clueless on something so fundamental?  He was a dealmaker.  His specialty was simply buying other companies.  His knowledge of how various regulations affect the macroeconomy, or how they affect a company's risk, is at the level of your average fortune 500 CEO: banal.

Leaders of small groups tend to be highly competent, able to do almost everything better than everyone in the group.  Yet for large groups, leaders are quite clueless.  I remember working for executives at KeyCorp, and the big joke was always how to dumb down things for our CEO and the management committee.  They were hopelessly clueless about the most basic relationships between interest rates and our basic business, or risk factors on our book.  Consider that Bob Rubin was on the management committee at CitiCorp, and after pulling in $115MM, noted that he had no idea they were exposed to the mortgage debacle.  I'm sure he was telling the truth.

Needless to say, the policies of Bill Clinton and George Bush were extremely important in the mortgage fiasco, and they too are so oblivious they rarely even bother to comment upon it.  They were merely for more home ownership, which given enough cognitive dissonance is totally unrelated to the eventual result that no money down mortgages were being given to people without income documentation.

In my experience, CEOs and politicians with tens of thousands of subjects are much less competent than leaders of organizations with 10 to 100 people.  The big leaders are very good at politics and public relations, necessary skills, but ones I personally don't find very interesting or admirable, mainly because platitudes and insincerity are so common in that realm.
Posted by Eric Falkenstein at 7:56 PM

"Consider that Bob Rubin was on the management committee at CitiCorp..."

I think it was Citigroup by then, but it is amazing how Rubin's reputation for genius has declined over the last dozen years or so.

This, it seems, raises an important question: how do large groups get organised? If there is no überman available capable of leading in the traditional small-group fashion of being able to do everyone else's job better than they can, then what alternative do we have?

Requiring a leader, a single person to be in charge and to carry the can for failure, seems to be a fundamental of human psychology. The levels of psychological discomfort felt by people when led by a committee of true equals are really striking.

While you are right about the size being the most important co-efficient, its a mistake not to pay attention to the core functions being undertaken.

Given that banks have government backing of their deposits, they are in some sense the policeman of our money. In this sense, a small traditional bank making individual loans is like the policeman firing a revolver with limited ammunition. An investment banking operation is like a policeman with an automatic machine gun, which can spit out a lot of bad loans/products in rapid succession. The investment bank is dangerous whether it has a small ammunition magazine or a large one.

The only real way to control the size-factor is to limit the ability of traditional banking businesses to perform investment banking. No fool would lend money to Merrill Lynch's prop desk for the .05% rate that Bank of America is paying its depositors.

'The only real way to control the size-factor is to limit the ability of traditional banking businesses to perform investment banking. '

Almost all of the sober studies of the performance of commercial banks v. investment banks, prior to the Great Depression, tell us that the commercial banks had fewer losses. I.e. Sen. Carter Glass was dead wrong that speculative lending by banks underwriting corporate securities was an important cause of the Depression.

Note that it was not corporate securities, but mortgage backed securities that were at ground zero of the current financial mess. As Eric correctly noted, Glass-Steagall had nothing to say about them. But its existence did delay the implementation of index funds like the S&P 500.

That's all without mentioning that sections 16 and 21 of Glass Steagall are still law. That is, the sections that define commercial and investment banking.

What has been repealed (under Gramm, Leach, Bliley in 1999) were sections 20 and 32; the 'affiliations provisions'. Which came in handy for Ben Bernanke in 2008, as it was a factor in alleviating the problems bedeviling INVESTMENT BANKS.

Patrick, I had to laugh at your "almost all sober studies" comment, as it sounded like a Krugman absolute statement.

The fact is, banks, utilities, and trusts were all engaged in a myriad of pyramid schemes where they would underwrite a failed deal, then simply invest depositors money into the failed deal. Depositors were rightfully panicked, not solely because they didnt have government deposit insurance, but because investment banks were dumping their dredge securities into the accounts of widows and orphans that were unsophisticated and incapable of understanding the risks (even if they were told, which in many cases they were not). An extreme example, but accurate historical one.

There were many early forms of leverage-on-leverage, ponzi-schemes, pyramids, and fraudulent underwriting in that period. Goldman shorted Abacus, whereas it shorted its own investment trust in the 1920's. Its remarkably identical.

This forced legislators to create the entire 1933 framework, of which Glass-Steagall was simply one important element, think PUHCA, FDIC, etc.

While Eric is incredibly smart, its a bit arrogant to pretend that you can pull out a big piece from the Jenga puzzle and state with 100% confidence that it had no impact (particularly after the Jenga puzzle clearly crashed to the floor!)

"The optimal organization for a family is communist..."

Living in a household with a super-majority of females, I'm holding onto my benevolent dictatorship for as long as I can thank you.

Troy, most of what you've written is just not factual. 'Goldman shorted Abacus', say. Goldman ended taking a good deal of the long position (and lost on it).

And, the FDIC was part of 'Glass-Steagall', not something separate. Which is pretty good evidence that Glass-Steagall was not repealed.

This Sunday 7/29 blog really rattled some long dormant brain cells. If I remember correctly, wasn't there a large discussion/fad back in the 70's along the lines of - "corporations/companies: small is better"? I think there were books with those titles as well...