The 99% seem to be pathetic at asserting their self interest. They have a huge majority, but are totally incompetent or unwilling to assert their preferences. What's the matter with Kansas? Here's a simple theory, where I will assume there's pretty much a 50-50 split currently among the electorate as to the preferred direction for tax rates, regulation, etc. Those who succeed in the marketplace favor allocation by markets, not governments. Those who do not succeed in markets favor government. 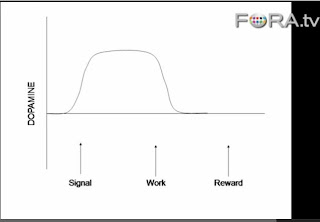 Now, people tend to get happiness not so much about what they currently consume, but rather an expected consumption of the future. Robert Sapolsky has some neat data on monkeys and finds that monkeys and humans commonly generate the highest levels of dopamine when pleasure is anticipated, not when pleasure is actually experienced. See the graph above for a picture of how dopamine spikes upward not when the monkey gets the reward, but rather when it anticipates getting the reward; the actual reward is anticlimactic.

This rationalizes the Bryan Caplan puzzle that people tend to not merely vote for the direct self-interest of their income level, but are rather 'groupish', or altruistic towards their group whatever it may be (humanity for some, a tribe for most). In the long run moving to a larger or smaller relative private sector affects one's future with a different sign depending on one's 'skills'.

Every month or so I get a letter from some class action lawsuit that gives me $2 if I fill it out, all for some vague corporate crime. Such class action suits aren't interesting to me because  they are not worth my hourly wage and more importantly they don't raise my status, rather redistribute money from some unknown corporate exec to some unknown lawyer plus everyone.  Similarly, bonking all the George Soroses on the head, taking their money, and giving to all Americans would be pretty pointless: it wouldn't raise the relative status of anyone other than the chief prosecutor. If I think this money won't merely be redistributed, but rather, reallocated towards a different sector, I have to ask myself: which sector do I want to see succeed? An increase in tax rates or government benefits implies a relatively larger governmental sector.

Diversity consultants, union reps, etc., want the size of government to grow because it helps their status; those good a solving problems for a profit maximizers would relatively lose, and prefer the opposite. This is why the issue of tax rates is usually a toss-up even though, from a simple perspective given the lognormal distribution of wealth this seems counter-productive. Those good at markets want the non-governmental sector to thrive, even if that means the superstars become billionaires. It's not anticipating a higher income for everyone via trickle down economics, it's anticipating higher status for them as their preferred sector grows.

Obviously, it's more complicated than that, but as a 30k foot view, I think it explains why so many making below $250k/year don't want taxes raised on those with such incomes.
Posted by Eric Falkenstein at 10:03 PM

This idea about people voting only in their material near term interests (or to maximize their long term NPV) is just dumb. How would one quantify a vote on whether to start up a Soylent Green program?

It's empirically observable that people vote in a way that's generally most consistent with their culture/philosophy. Most people's philosophies are a mishmash, and most candidates platforms are also a mishmash.

Which means that values people choose for themselves, pick up from parents, freinds, teachers, and preachers, and TV/Movies, all have a big cumulative impact on future voting preferences.

Economists who try to turn voting choices into econometrics are fundamentally blind to the main signal in this noise. I suspect the material gains theory is most meaningful at local school board elections, and similar local elections where a few votes have big and obvious impacts on incomes.

Thank goodness that a substantial number of people in the US still have some vague understanding of the value of liberty and individual rights beyond it economic value to them and their immediate family over the short term.

You don't really know if the reward is anticlimatic: it seems that dopamine only mediates the expectation, not the actual reward, so you can have a mismatch between expectation and results both ways (the actual pleasure could be greater than the dopamine expectation, fun can be unexpected). It's not enough to invalidate your theory though, as you can still credibly argue people vote (or trade, more generally) according to expectations and disregard actual results.

If you really want a valuation based theory to explain the original paradox, what about simply using the low volatility anomaly: a low income person voting for low tax for high income people is buying an out-of-the-money option to pay low taxes in the future when they themselves get high(er) income; and they misprice it as usual.