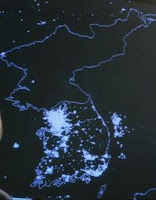 A war is like a bar fight in that 100% of them involve at least one real jerk and most are avoidable, yet sometimes you need to fight. I know that your average 19 year old doesn't really choose who he fights for, and so its not like American 19 year olds were more enlightened than the Germans or Soviets of WW2, but their actions are sometimes necessary, and always take courage and sacrifice. Hopefully this century will have fewer wars than last, but it all has to be put into context as there is a lot of suffering and death caused not by organized conflict, so unfortunately pacifism is not always the answer. So, here's a salute to the poor guys who gave up their life for others, such as the 50 million South Koreans who live a relatively nice life relative to the alternative.
Posted by Eric Falkenstein at 11:24 AM