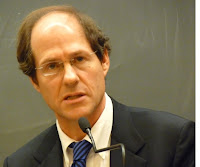 Cass Susstein wrote Nudge, a book about 'libertarian paternalism'. This sounds like an oxymoron, but he would always try to highlight its character with the example of changing the default choice for 401k investments so that people save more.

Yesterday, however, he highlighted his strong paternalistic side, discussing his new idea that all websites provide 'the other side' of arguments:

Alas, most bloggers aren't super political, and when you move beyond Left and Right, the other side isn't obvious. I mean, I disagree with 'market irrationality' man Robert Shiller on a lot of issues, but also 'market rationality' proponents like John Cochrane or Eugene Fama. I'm a strong critic of Financial Theory, but find most other critics of this theory to be 'more wrong', and probably have less in common with your average finance critic than with the ruling elite of modern financial theory.

I think Susstein is showing the absurd slippery slope of his libertarian paternalism, and he's doing the sliding. I disagree with everyone on something, agree with no one on everything, and often share similar conclusions with people for very different reasons, so the weighting of my disagreement would be vital in figuring out my opposite link. Who weights the issues of agreement/disagreement? If this incredibly naive, unworkable idea was sufficiently vetted to merit mention with NPR, I would love to know what his other ideas are.

On the other hand ... I guess the Al Gore would then have to admit the Climate Debate is not over! Indeed, a lot of issues Susstein finds have no legitimate other side would now be on the table! I'm thinking everything from racial profiling to all the Politically Correct taboos, such as the assertion the Holocaust never happened, HIV does not cause AIDS, etc. He would be 'hoist with his own petard', as the Bard would say.

Actually, if The Man starts giving me orders, I think it would be quite fun because I imagine the poor chaps in the "Office of Website 'Opposite Link' Definitions" would be in way over their heads, and that would mean fewer regulators actually doing real harm implementing regulations they could enforce.
Posted by Eric Falkenstein at 8:37 PM

I wanted to email you, but there seems to be no link attached to your blog. I wanted to tellyou that I am a huge fan of your risk/return paper and your book, even though some of it was over my head. You seem to be a level-headed man that has a good big-picture view and I really respect your opinion. I was hoping that you'd honor my request for a future blog post. I'd be really interested in reading some recommendations for readings in the macroeconomic and markets spectrum. I am curious and enjoy reading, but sometimes it is hard to find something that's in the space between pop-econ and the stuff you almost need a phd to read. I was hoping you'd have something to say on the subject.

Is sunstein new to the internet? Almost uniformly everyone trackbacks to the opposing side's commentary. They just do so to totally trash the other side's views.

Seriously, what a weird and creepy statement.

Morally Bankrupt: my reading list would be as follows
1)statistics and probability
2) basic econometrics
3) Some b-school Corporate Finance textbook, like Brealey and Meyers, or by Ivo Welch.
4) a book on derivatives pricing, such as that by Neftci (the thinner the better, a lot of these books are way to large).
5) A Random Walk Down Wall Street, by Burton Malkiel
6) Justin Fox's A The Myth of the Rational Market, or Shiller's Irrational Exuberance.

There are advanced texts that are good, but mainly if your are really interested in theory (eg, Cochrane's Asset Pricing).

It sounds like he's longing for The Fairness Doctrine, which was only even vaguely workable in the days when we had three television channels.

A "what's the other side say about this?" feature does feel kind of inevitable, but it's still A Hard Problem. You can't just ask bloggers to link to their strongest critics themselves because they don't know who their strongest critics are and even if they did you can't trust them to be honest about it. You might be able to solve this to some degree at the meta-level, though. For instance, if you had access to enough of the right kind of data at sites like "reddit" where people upvote and downvote comments and links you might be able to partition the user/discussion space in such a way as to find the highest-rated link posted in opposition to some link or opinion.

I suspect the problem is solvable - that there does exist some way to crowd-source identification of opposition links, arguments, and sources. After which it could become an infrastructural feature - you'd have a button on your browser for it; google would have a search flag for it.

I can't quite figure out what makes him think congressional hearings on the matter are a good idea.

Thanks for the list. I got a BS in Econ and am fairly familiar with statistics and econometrics. I mean, I'm no expert but I can smell multicollinearity and autocorrelation problems and I generally know when I am entering data-mining territory. I've also read Schiller's stuff, but I still wanted something meatier.I'm hoping This Time it's Different will have that because Irrational Exuberance and Animal Spirits were a little too "airport" for me.

The corporate finance stuff, I will indeed check out. I should really have a more in-depth knowledge of it. Most of what I know came from the Level I CFA examination, and that was very 101.

I'll definitely take a look at the asset pricing stuff. I know some basic pricing stuff, but I'll check out that recommendation because, while I'm very familiar with all the greeks, I probably don't know enough about things like swaptions and the more exotic otc products. Seeing the guys at NP argue over pricing models left me a little intrigued. I could definitely code those models, most of it is just a SMOP, but what I want to learn is how to really fundamentally understand the hows and whys of it all.

It's hard sometimes, finding those books that help you put together the big picture or at least see more of the pieces. I just finished The Holy Grail of Macroeconomics and half of it seemed obvious and the other half head-slappingly "how did i never think of that before?" I'm chasing those moments right now.

I'm not learning it because I want to make millions in wall street--I am a software engineer and I like making my living by writing software and modeling big databases--it's just kind of a hobby of mine, the same way people watch TV or collect things or garden.

Glen's idea of automating it is awesome. If you're reading Krugman or the pharmacy guy at Corrente, then Google could suggest some other stuff you might like. (I got to this site by googling for authors who had something original to say about Taleb - it certainly has added to my experience, but requiring Taleb to present the other side wouldn't get you there. He would just say that the world is full of fools who disagree with him, and he does that already).