An Example of Opposite Views 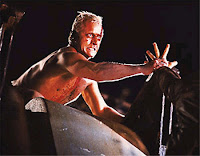 In anticipation of Susstein's Brave New World of idea diversity, Gawker has a neat post on scientists working to figure out why the universe exists (and you thought beating the market was hard).

Why are there things, instead of nothing? It may hinge on a kind of particle called a "b-meson," which constantly moves back and forth between its matter state and its antimatter state—but which moves more easily from antimatter to matter than the other way around.
...
People who are stoned are working on a competing theory of existence, based on that awesome scene in Blade Runner where the guy is on the roof? You know? Man.

Posted by Eric Falkenstein at 10:28 AM

That was Rutger Hauer, I think, in that scene. Great movie.

I've only been there once or twice, but there's a section of Queens that reminds me of Blade Runner's vision of the Los Angeles of the future. I call it BladeRunnerville.

Blade Runner's landscape was based on the ICI Wilton Chemical Plant on Teeside near Middlesborough in the UK.

Scientists do end to over-reach themselves. I particularly like how modern cosmology predicts that 80% of the mass in the Universe is something omnipresent but invisible, that influences the motion of the physical world, and is called "Dark Matter", and this theory disproves the existence of something omnipresent that influences the physical world, called "God"

b-meson has an antiparticle called the B antimeson or "B-bar". Obviously, the universe was created by vodka and beer alternating at great frequency. I want my theory to be quoted every time the b-meson theory is mentioned.

Anonymous, even though we don't understand it completely, there there is real evidence for dark matter. This includes the classic look at spinning galaxy speeds, as well as analysis of colliding galaxies, where the gas clouds collided but the dark matter continues on without the same type of collision, but a continuing gravitational effect, etc. Hopefully, your assertion was an attempt at humor, because of course, nothing about dark mater either proves or disproves God. Most scientists consider supernatural religious claims outside the realm of science (unfalsifiable and untestable propositions).