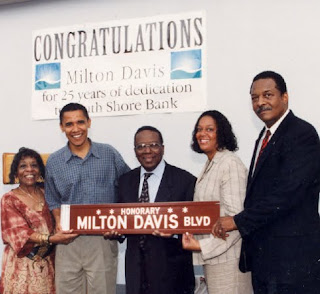 Chicago's ShoreBank has received dozens of accolades from politicians, nonprofits, and academia for their work lending to 'underserved' urban and rural communities. Above is a picture of one of the founders, Milton Davis--along with some community organizers--having a street named after him.

One of their executives testified to Congress in support of the 1977 Community Reinvestment Act. Shorebank worked with Clinton in Arkansas, and in 1992 Clinton called Shorebank 'the most important bank in America'. They gave money to Obama's presidential campaign, and he mentioned them as an example of good lending on his trip to Kenya when he was a Senator. The Illinois Finance Authority chairman and the current ShoreBank CEO are childhood friends (btw, did you know bank regulators included state 'Finance Authorities' that presumably help the commonweal?).

Now that we discovered you can actually 'overserve' borrowers--which isn't good either--and many banks have suffered, including Shorebank, which now needs about $125MM to avoid an FDIC takeover. Who ya gonna call? The WSJ reports that none other than über-weasel Lloyd Blankfein is stepping in to save this necessary institution!

Yesterday, Cliff Asness and Aaron Brown wrote about the new financial regulation bill in congress, and how what was so unsettling was not anything in the bill, just that there was a lot of power being granted without much guidance, a legislative dream. Finance has always been heavily regulated, and so bank executives have always been heavily populated with lending naifs who merely knew how to do PR. In our brave new world where government can take away your license to do business at a whim, you need to pay into the favor bank on regular occasions.
Posted by Eric Falkenstein at 8:45 AM

I am in a different line but maintaining good working relations with regulatory and permitting bureaucracy is the most important part of the business. You know that (but are reluctant to accept it as a fact of life) since most of your posts relate to regulatory issues.

Here is lots of useful information about Bank Accounts also you can directly apply for prepaid mastercard, credit cards and debit cards.

I am motivated with this article. As it is about the new financial regulation bill in congress.