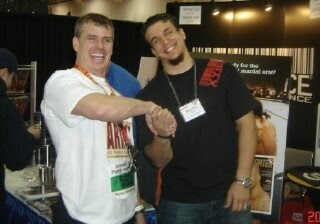 My forecasted winners: Henderson, St.Pierre, Lesnar.[note: this was pre, and I was 100% correct!]

I actually wanted to bet on Lesnar, but on bodog.com it looked like I would have to risk $5 to make $1, which seemed too expensive. But Lesnar's a local guy, and I heard that he really trains hard, and is just a genetic freak in terms of strength. His partners said that Lesnar's ju-jitsu has improved considerably so Mir has basically no chance of surprising Lesnar with a knee bar like last year.

Too bad Frank Mir lost, he's a really thoughtful guy, unlike Lesnar, who is dumb as a post. Here's a picture of me giving Frank the business at the Arnold Classic in 2005.
Posted by Eric Falkenstein at 9:15 PM