Efficient Markets vs. the CAPM 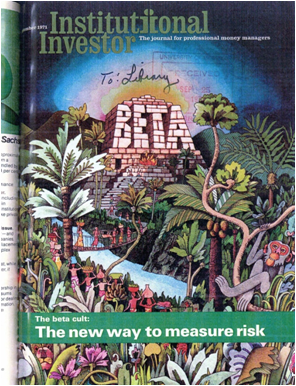 The 'myth' of the rational markets suggests a straw man argument in practice, a position no one argues, but popular discussion and pandering authors discuss endlessly. If you think rationality implies perfection or an absence of market declines you are wrong, so don't waste too much time on this precious insight; it's like discovering that nature AND nurture affect IQ.

It is important to remember that while academics, almost exclusively economists, believe some form of market efficiency, most non-economists don't. Back in the 1970s and 80s when index funds were being introduced, most leading magazines lambasted the idea, noting how stupid an index fund was because people like Warren Buffet or Peter Lynch proves this is suboptimal. Thus, John Bogle (head of Vanguard) had to fight to get his board to accept an index fund, and this while he was CEO! Even today index funds are a small portion (about 15%, depending on how you count it) of equity investors.

In my book Finding Alpha (which has a short SSRN summary article here), I note that unlike Efficient Markets Hypothesis, which has never been popular with regular people, the Capital Asset Pricing Model has been warmly regarded since inception. The picture above shows the cover of Institutional Investor magazine in 1971 discussing 'The Beta Cult' as if it were a done deal. The first empirical confirmation had yet to even be published! Of course, this confirmation (by Black, Jensen and Scholes('72), Fama and MacBeth ('73), and Blume and Friend('73)) was spurious, meticulously correcting for 'errors in variables', but totally blowing it on the omitted variable of size, which itself proxied measurement error issues related to delistings.

Why does the CAPM and its derivatives get such a better reception than the Efficient Markets Hypothesis? Both rely on rational investors, though they are independent theories (neither implies the other). I think the efficient markets hypothesis plays into an easier caricature, which is unfortunate because as a guideline the implication of the EMH is a much better approximation of reality than the CAPM (or its spawn the SDF or APT approaches). That is, no measure of risk linearly, positively, relates to returns as a first approximation. In contrast, most investors lose money the more they trade, and their deviations from the market do not, on average, have alpha. See a small discussion from my video 3 on my book Finding Alpha:

So all you non-economists so self-satisfied for not believing that markets are perfect, have fun taking on idiosyncratic risk for an extra 100 basis points a year. Way to stick to those smug economists.
Posted by Eric Falkenstein at 10:44 AM

The implications of EMH have extended far beyond diversification strategy. The EMH has become a short-hand for managers inside large corporations who were trained in it in business school. Whatever its merits as an investing analysis tool, it has wreaked a lot of havoc on corporate culture by glossing over the important variations over time and with place that result in growth or decay. What prescriptions does the EMH offer for managers that have been empirically validated? Not enough to justify its use as the philosophical underpinning for modern org theory. Leaders should be encourage to measure and analyze independent of the market -- an improved ethic that would enhance social well-being exponentially over long time periods.

basic implication is simple and clear: it is very difficult to outperform 'the market'. Proof: retail, and professional investors on average do not outperform, instead, underperform with higher variance. The handful of repeat performers is hardly worth the cost. The agg. cost of this is large.

What bothers me is that Malkiel and other EMH proponents argue that Joe Sixpack investors tend to get in and out of the market at the wrong time, so they underperform the market. If this is true, it may be the most convincing evidence against the EMH. And it's why I try to buy what everybody else is selling.

If the market is hard to beat if you're fully invested all of the time, then comparing that performance with an index makes sense, apples to apples. But how does one measure timing as a strategy? You're in the market less often, but that doesn't mean you're taking less risk.

Love the blog, but you definitely have an academic bias on this one. Your argument basically translates into: the average investor cannot beat the average. Of course, he can't.

You need to read (or re-read) Buffett's Superinvetors speech. If all of the Orangutans come from the same zoo, you should wonder what the zookeeper is feeding them.

Efficiency doesn't happen magically. It happens because smart and hard-working experts spot the efficiencies and arbitrage them away. Graham and Dodd showed their Orangutans how to find a certain class of inefficiences that existed back in the 1950's. Those inefficiencies no longer exist to any great extent and the Oranguatan from the Graham and Dodd zoo aren't doing much better than the market recently. Buffett is no longer a superinvestor so much as a super manager of a conglomerate. The bulk of BRK's recent profits comes from Buffett's shrewd instincts with regard to the insurance business.

There are still inefficiencies in the market, big ones, but no longer many of the Graham and Dodd variety. The big inefficiency now is absolute valuation, when can be exploited via adroit market timing. This inefficiency is likely to persist indefinitely, because exploiting it requires remaining in cash and thus underperforming for years at a time, which only individuals can do. Professionals tend to be fired for underperformance when they attempt tactical asset allocation.