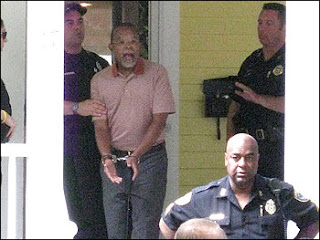 James Taranto notes the latest kerfluffle about Henry Louis Gates getting arrested for Breaking and Entering, as a neigbor saw him breaking into his own house (the door was jammed). The Boston Globe notes the following thoughts from Gates's Harvard colleague:

“He and I both raised the question of if he had been a white professor, whether this kind of thing would have happened to him, that they arrested him without any corroborating evidence,” said S. Allen Counter, a Harvard Medical School professor who spoke with Gates about the incident Friday. “I am deeply concerned about the way he was treated, and called him to express my deepest sadness and sympathy.”

Counter, who had called Gates from the Nobel Institute in Sweden, where Counter is on sabbatical, said that Gates was “shaken” and “horrified” by his arrest.

Deeply concerned? Shaken? Horrified? Look at the picture above (taken from the Wash Post), and you can imagine the scene (love the look on the black cop's face, the hand raised, the open mouth on Gates saying you have "no idea who [you're] was messing with!"). He has an interview on The Root talking about his 'terrible and humiliating' experience.

I remember having blown a bike tire in grad school I walked my bike tire to the bike shop across campus. I was an instructor at Northwestern at the time, and there were many bikes around campus and nearby, along with many bicycle thiefs (alas, my best bike ever was stolen there). Now, holding merely a bike tire looks suspicious because many bikes are locked up in a way that you can easily remove the tire. Anyway, cops saw me, and gave me the run-down: where was I going? where did I get the bike tire? where did I live? Where did I work? They called in all this information, and it took about 15 minutes to verify I was an instructor at the University. Finally I was allow on my merry way. There was no apology received, or asked. They weren't mean, but they weren't very nice either.

I've had several such run ins. I figure many cops are jerks because it appeals to people who like to boss others around. But it's an essential job, and if we had a bunch of sociologists or peace activists on the police force there would be anarchy, which only helps non-uniformed oppressors.

As someone who had liberal parents growing up in Southern California, I have never been racist, so I have no racial guilt. I think everyone should be treated the same, which is why I find these cases so repellent. Obama is not making these incidents go away, just as electing black mayors did not reduce the claims of racism in the cities where this occurred. I suspect many whites thought that by electing a black president, perhaps black/white relations in America will turn the corner, as the black community would see this as evidence that the white majority is not racist and assimilate like the Germans, Irish and Italians. I was born around a year after the Civil Rights Act was signed and my parents remember driving through the 1965 Watts riots to the hospital. As a child my parents were rather optimistic as if black/white would be like Lutheran/Methodist, a distinction without any resonance today. But things aren't getting better in general, and I'm not optimistic.
Posted by Eric Falkenstein at 8:17 AM

help me understand the cause and effect between having liberal parents and never being a racist?

or maybe was that meant to be sarcastic?

either way this is a very informative blog.
thanks

I was always taught to treat people as people irrespective of their race. I never saw people I knew treat or talk about black people poorly based on racial prejudice.

I later learned in college that same(many?) would call me racist anyway, either for saying something like 'black guys are fast' or because of institutional factors that affect my psyche in ways I'm too brainwashed to recognize. I think that's BS.

Having grown up in LA and then living for a while in OK, I understood what you meant, Eric. - Ilene

Eric: There are, in fact, large areas of the country where your parent's hopes about "the races" (sic) becoming no more divided than the Lutherans/Methodists have come true. The most notable of these is the Old Confederacy. What is as remarkable is that in the South and elsewhere the divisions between Catholics and Baptists have also shrunk to comparative insignificance compared to what they were half a century ago. (Your parents clearly were liberals; how else could they have presumed that two religions that were left-left and left-left-left of center represented the spectrum of religious difference in America.)
Take heart. What the Gates incident proves is that the one prejudice that has not disappeared is the arrogance of the highly educated toward everyone who did not go to graduate school. Professor Gates ended up in handcuffs not because he was black but because he presumed to lecture the police about his rights and refused to provide any identification. The picture you posted tells it all; the white policeman in the right of the frame is motioning for Gates to cool it. Gates' invective is clearly directed not at "whitey" but at the black policeman standing with his back to him. The racism that you should deplore is Gates'; he is clearly verbally assaulting the black policeman for having the temerity to "act white" aka follow standard procedures for people who break in doors and then refuse to provide any proof that the house belongs to them. One last caution: perhaps you should reconsider your lack of any ethnic/racial "guilt". Your notions about the assimilations of Germans, Irish and Italians betray the same racism that President Obama has in his assumptions that all white people are alike. Check the names of the Supreme Court Justices and note the dates when the first Irish, Italian and German surnames appeared. To date those three groups - the largest ethnicities in America - have had exactly one representative of their "races" (sic) take the Presidential Oath of office. In using the usual black minority/white majority liberal paradigm, you are being far more prejudiced that you realize because you are assuming that there are no other historical social/cultural divisions in America remaining to be resolved besides the ones that Professor Gates summons to justify his temper tantrums toward people who do not respect his authority. (In the end this reminds me more than anything of Eric Cartman on his tricycle.) Thank your for your wonderful DefProb. All the best.

Hard for me to imagine the neighbors calling the cops on Gates based on his appearance - how many burglars are (1) 50+ year-old men (2) acting alone (3) wearing a polo shirt (4) tucked into khakis?


"Gates'; he is clearly verbally assaulting the black policeman for having the temerity to "act white" aka follow standard procedures for people who break in doors and then refuse to provide any proof that the house belongs to them."

All I see is a huy screaming in the picture. The rest is projection of your ideas on to a scene. ANd according to the report you posted he did provide his ID.

"Disturbing the peace" is a crime that you can commit on your own property. It is, in fact, the principal offense that the cops use to break up domestic disturbances that have gotten so far out of control that the neighbors have called. This disturbance began when Professor Gates was asked for his identification and initially refused to provide it. It would have ended there, but Professor Gates decided that it was intelligent, civil behavior appropriate to a tenured member of the Harvard faculty to follow the policeman out of doors and announce to the world at large that the officer and his colleagues were racist pigs whose "mamas" would be hearing from him. Not surprisingly, the officer decided that such charming invectives qualified as disturbing the peace. The racism here is Professor Gates', not the policeman's. People who are professionally black, who identify themselves first and foremost by their skin color, are almost invariably hostile to anyone who does not bow down to their ideology of permanent racial grievance. As Eric noted in his blog comment, there can be no defense to such an accusation based on one’s actual conduct or attitude. If you are “white” (sic), you are guilty. I can understand the advantage that people find in being professionally black; it pays. I can also understand the anger that such people feel when they are reminded, yet again, as Professor Gates was by the policeman, that most of us "white" people are maddeningly indifferent to the question of race. We know that our children have attend school and sit mutely while "white" people are blamed for slavery, regardless of whether any of our ancestors owned slaves or were even in this country when slavery was the law. If we are in law enforcement, we know that black on black violence and theft is, by far, the greatest criminal problem in most black people's lives. But, we really don’t spend much time thinking about such things. And that indifference is, of course, the ultimate proof of our racism. We should be as obsessed about the question of skin color as the media and school teachers and race relations instructors and the others who make their living from the issue are. Instead of thinking about how our children wait tables to make an extra $100 a week to pay for school, we should be thinking about the pain that the President's wife endured by having to go to Princeton and take the bar exam twice so she could make more money in a year than the average waiter makes in a decade.

I am white, I am indifferent to race, and I feel zero guilt about slavery, segregation, etc. I don't feel at all that media, schools, etc are all obsessed with race relations and forcing us to think "about the pain that the President's wife endured by having to go to Princeton..."

I think you are obsessed with thinking people are obsessed about race and making white people feel guilty. Perhaps, it's a generational thing. I think the new generation is post-post-racism.