Why I'm a Fama Fan 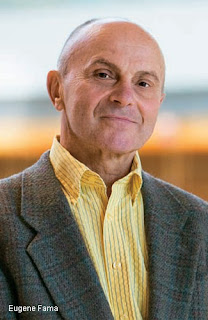 Aaron Brown was gracious (and insightful!) enough to give a rather nice review on Amazon for The Missing Risk Premium (paperback here, Kindle version here) and at Minnyanville. You can read it there. One point I made he found irksome was where I noted my Northwestern professors considered Fama a 'lightweight'. This was back in the early 1990s. Unfortunately, he inferred something I didn't intend, namely that I too considered him a lightweight in the way many opinion columnists will write 'some say welfare reform is a racist dog-whistle', so they can say and not say it simultaneously. I replied via a comment on Amazon and to him personally, and he accepts my explanation as no mere tendentious parsing of that statement (though clearly, when people don't infer what I imply, I'm guilty of not saying things as well as I could).

My point was not that my professors were uniquely wrong, just that conventional wisdom then thought the best research was examplified by the rigorous work of people like Jay Shanken, Michael Gibbons, or Stephen Ross. These papers emphasized rigor, issues such as jointly estimating betas and alphas, or whether to use Lagrange Multiplier or Likelihood Ratio Tests. The thought was that the theory was basically correct, where expected returns are a linear function of a covariance with something, and so the really important insights would be found via ever more sophisticated econometric techniques.

It wasn't a dumb idea, but it was wrong. CAPM betas couldn't be saved, and rejecting them via these tests didn't really point to what was wrong. Fama is now one of the most respected names in finance because he has championed a model that seems to work, and part of his persuasion involved simply cross-tabbing average returns by size, then beta. This showed that the standard CAPM betas were untenable as measures of risk, because when one does this beta is unrelated to average returns, and these average returns are our best estimates of expected returns. He not only changed the focus from covariances to long-short portfolios that (conceivably) proxy a risk factor, but from abstruse statistics to cross-tabbing.

I admire Fama for his clear arguments, his intellectual integrity (he changed his mind on the CAPM betas, he didn't jump on the momentum bandwagon and merely said 'it's a puzzle') and also his defense of efficient markets, which is often maligned by to my mind remains a pillar of finance. That is, a healthy respect for the default assumption that it simple profit rules are rare is valuable disposition, otherwise one chases all sorts of overfit will-o'-the-wisps. So, my mention that Fama was once considered a lightweight was meant to give some color to how finance has changed in methodology, which is reflected by what kinds of research and academics are considered top shelf.

Rigor is a good thing, but it should never be more precise than the data allow, and as most of our tenable theories are simply about whether certain coefficients are zero, positive or negative (eg, for CAPM betas), not what the 11th digit is, the distinction between Wald, Likelihood ratio, and Lagrange Multiplier tests is moot. Unfortunately, there is still a rigor bias in financial theory, why so many important results are in lesser tier journals like the Journal of Emerging Markets, the Pacific-Basin Finance Journal, or the Journal of Empirical Finance. If the finding only arises from a GMM estimate of parameters of a stochastic discount function, but don't generate a scatter-plot or total return chart, it almost surely doesn't exist.

While I agree with 90% of Fama's weltanschauung, he strongly believes in risk premiums, and I don't, and that is an important disagreement. Nonetheless, I still greatly respect the man and read almost everything he writes.
Posted by Eric Falkenstein at 10:00 PM

Why don't you believe in risk premia?

My boss loves the idea. I'm yet to be convinced.

I'd appreciate reading your arguments against it.

Would it not be true that small cap value stocks - which have the greatest volatility over time - also have the highest returns?

I don't see how anyone can portray Fama as a lightweight, unless it's because of professional jealousy. Fama is clearly a heavyweight - and a very dangerous one! He says in the face of anomalies that markets are efficient and bubbles don't exist. That kind of thinking lulled us into a very bad financial crisis. It reminds me of Bob Merton getting accolades for introducing rocket science (Ito calculus) into option pricing. This nifty equilibrium model almost destroyed our financial system through LTCM. There's more to heaven and earth than is dreamed of by those philosophies..

It was my impression that LTCM was more about Meriwether's unwillingness to reel in his traders than a failure of Black Scholes. Had they not been leveraged 50-1, they probably would've been able to weather the storm. I find it interesting that their trades only started to come around after Greenspan lowered interest rates. I also find it interesting that Fuld balked at the LTCM bailout plan and then found himself on the short end 10 years later. Banker payback?