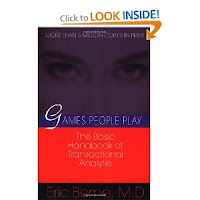 I just read Eric Berne's book 1964 book Games People Play and it's a fascinating piece of psychology. The author is an expert on human self-deception and the real meaning of rituals. For example, he gives this example of a typical American ritual:

The exchange is not intended to convey information. Indeed, it's polite to not exchange information. Rather, it's simply a ritual of exchanging 'strokes' that build trust and convey interest and empathy, that is all. There are all sorts of such rules that are culture dependent, why it is so important for children to learn 'how to be polite', which means, how to engage in everyday banter that isn't about what it's superficially about.  I remember as a child finding the phrase 'how are you?' to make little sense (no one wanted to know!), and wish I read this at 13.

There are many rituals and pastimes where people don't mean what they say and Berne's book is geared towards cases when people engage in repetitive behavior where both parties appear to having a continued struggle, but really are in a rut that is at some level satisfying to both, as when an argument between family members always ends with doors being slammed.

I think Freud's a quack, as his childhood sexuality thesis is absurd and his convoluted diagnoses cribbed from reading too much Sherlock Holmes (see Sebastiano Timpanaro's essay in Unauthorized Freud). But he's was on to something, and and all such talking cures (such as Scientology's auditing) rely on uncovering people's hidden motives, the ones that underlie the games outlined in Berne's book. When enlightened people are forced to confront these they are better off.

It's always interesting to notice people you understand better than they do themselves, sad sacks who make similar mistakes over and over, and seem totally oblivious to their bad habits of thought. They rely on a strange cognitive dissonance that keeps them from really seeing themselves. I noticed it once in myself when I met an old college friend and he said, 'remember when you did X because Y!' I don't want to go into it (X and Y weren't that shocking), but in any case I had remembered my reason for X as being more reasonable. I then realized it was obvious I had lied to myself for decades.

We all lie every day, usually about inconsequential things. It's important to understand how often and easy it is to lie to ourselves, a theme in Jonathan Haidt's The Righteous Mind, and Michael Gazzaniga's work on split brains (the inarticulate part of our brain guides our thoughts more than our inner narrator). Indeed, the most unethical person I ever hope to know emphasized to me several times that 'honesty' was the most important thing to him, and he was probably unaware at a conscious level this was precisely because he knew how much he lied about important things. And so it is with many experts who not only lie to themselves, but do so about things they are expert at, or prioritize. Consider that active portfolio managers lie about their alpha, partisan intellectuals distort their opponent's arguments to make them easier to dismiss, and politicians lie about being leaders rather than slavish followers.

Back to Freud, he was always the smartest, most articulate person in the room, and coming up with clever solutions like Arthur Conan Doyle for personal problems using allusions to Greek literature and sex, all very impressive.  It allowed him to believe he was like a Newton for the human soul. He was lying to himself that he had discovered such laws in our thoughts.  This is not a paradox, it's the human condition, because for many of us clarity on the things most important to us is depressing.  It takes courage to see oneself objectively because we are all fallible and imperfect, and prefer not to think about our faults but rather the faults of others.

My kids are young and learn a lot every day.  I like to think I too am learning as much about life, even if not at their frenetic pace. I notice many adults adopt habits of thought and behavior that go pretty unchanged after a certain point.  It's as if they tire of the grief that comes with learning we are going about things sub-optimally because this causes us to re-evaluate all sorts of things about ourselves. Thus, wisdom seems to flat-line as opposed to increase throughout life like for Plato. I definitely want to avoid being one of those people others know better than I know myself.

As Feynman said in his Cargo Cult lecture, "the first principle is that you must not fool yourself--and you are the easiest person to fool." He was talking about science, but this virtue of self-honesty is not compartmentalized, but rather a virtue you practice every day on things great and small.

Posted by Eric Falkenstein at 9:32 PM

I've been reading your blog for a few years now, and that was probably my favorite post.

"phatic" is an under-known word. All that "Hi. Nice day, isn't it?" stuff is Phatics.

Perhaps that's why we want to try investing, "play the markets", start up a business, or engage in real life.

A dose of reality - success or failure in business life for instance - is surely the best cure for self deception; surely better than any psychological therapy.

Though I suppose you can blame that million dollar trading loss on an act of God (or Bernanke).

Agree with pretty much all (and I'm not just saying that to be polite!) although this book and its two companions cover a lot of the same ground in a very simple and straightforward fashion:

However, I'm not sure believing your own BS is quite the same thing as lying to yourself (unless you know its BS). Freud may very well have believed that he had discovered they key to how/why the mind works just as the homeopaths thought they were on the right track.

I totally agree with AndyinSanDiego. This post is amazing and deserves a book devoted to it. I could even imagine daytime television coinciding with the publication.

I'm with Andy and Alon. This post was a piercing ray of light. A very rare thing.

Thank you for writing it.