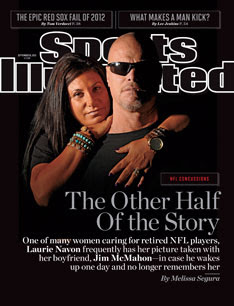 Sports Illustrated has a cover story on dementia and NFL players. They mention Ray Easterling, played for 8 years in the 1970s. They note:

If risk were positively related to return, one effect of this would be for many very wealthy people to be morons who took more risk than they realized. Sure, many would fail, but there should be vast riches to those who succeed. Indeed, in De Long, Shleifer, Summers, and Waldmann (1990), this is indeed the implication: wealth becomes concentrated among deluded investors who took excessive risk.

This clearly does not describe wealthy investors. Many successful investors are lucky, and many aren't extremely bright. But very few of them are stupid, that is, have dementia or an IQ below 85. This is just another datapoint supporting my argument that risk is not positively related to return. Risk taking without intelligence is a sure path to financial disaster. If it were all factor loadings derived from covariances, it would be too easy.
Posted by Eric Falkenstein at 8:29 PM

I don't see how positive returns to risk is required to have stupid risk takers be at the top of the wealth distribution. Lotteries create this effect while having negative expected returns.

I think the reason you don't see more low IQ people making a killing in the stock market is twofold. Low IQ people have lower incomes, and thus less money to invest. Also, purchasing securities is much more complicated than buying a lottery ticket. Even making a foolish purchase of a volatile stock requires a certain IQ to fend off predatory salespeople and avoid excessive transaction costs.

Is it you or the other side that seems to be taking this high-risk/high-return debate too literally. Even the phrase "no pain, no gain" is usually deployed in a way which implies that there are other factors involved besides just pain.

Does anyone actually seriously contend that higher risk, all by itself, generates higher returns than lower risk? If it were the case that higher risk investments consistently generated, on average, higher returns....then a portfolio with a sufficient number of diversified but all high risk positions should always beat similarly structured, lower risk portfolios over a certain time horizon and that clearly isn’t the case.

Liquidating all your worldly possessions and heading for the back country to find gold seems like a good way to get wiped out. But if you have, or think you have a unique advantage in the form of better technology, technique or geological knowledge, it might be a risk worth taking. It would still be a “high risk” venture by any objective measure (lots of things could go wrong) but perhaps no longer the proverbial dice roll.

Risk can look positively correlated to return after the fact if you don’t realize you’re only noticing the big winners and also paying more attention to the risk part and less attention to the exploitable opportunity part: “Every self-made rich guy I know had to roll the dice at some point to get there so…”

Others have said it, but this has nothing to do with your very intersting point.

Highly diversifiable risk should not be compensated under models w/ or w/o a risk premium.

Nothing else going on here, move on.

1) if idiosyncratic risk is unrelated to returns, it should generate a large number of big winners in the context of the economy, like a lottery that actually offered 100% payouts.
2) in practice, assets with high idiosyncratic risk have high systematic risk. Not in every case, but on average, and this pattern is quite strong.

Those are both true, and irrelevant.

Nothing about idiosyncratic risk itself helps or hurts your point about whether systematic risk is priced.

Just admit this was a bad one and move on.

You are talking about purely financial risk here, but I think you overlook a lot of day-to-day risk taking that is not directly of a financial nature. The paragraph you quote says, "successful career in financial services" but that does not necessarily mean the guy ever risked his own money.

For example, suppose a guy drops out of one job where he is a mid-level salesman, and then pops up in a new job as a senior engineer and project manager. Easy to do, just invent some qualifications, often people get away with it. This sort of risk taking has quite a low penalty for failure, you might lose your job, but it's a job you never deserved in the first place.

There's lots of other examples: the audacious sales guy who pretends to be an old friend of the boss so he can get invited to functions... that sort of stuff.

A lot of normal people (and I include myself) find it difficult to even see such potential gains, and hold ourselves back by being self conscious. Ever so slightly unhinged people can get that mix of creativity, cunning, and outrageousness that surprisingly sometimes works.

A perfect example of the sort of risk taking that I was referring to. Very likely it will pay off too.