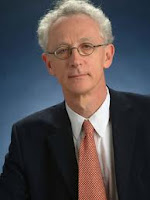 I generally find Emmanuel Derman to be a very thoughtful, but this interview with Russ Roberts made little sense. They were talking about Derman's latest book Models Behaving Badly, and they had these little riff on financial theory:

Derman: But I think Black-Scholes is much better than CAPM. Although it is based on the same idea. Because different stocks really have such different risk characteristics that the assumptions of geometric Brownian motion and the assumptions in CAPM don't hold very well for individual stocks.

Derman: I know Burton Malkiel reviewed my book in the Wall Street Journal, and he liked it generally, he was complimentary, but he claims in one paragraph that I was putting too much weight--he sort of claimed that all the efficient market model says is, I don't know what's going to happen next, as opposed to saying that current prices are right.
Russ: The first claim is a modest claim.
Derman: Yes, it is a modest claim. And I think maybe he is technically correct, but I think in everyday parlance people strive for a stronger version of it.
Russ: Yeah; I think the way you wrote it in the book is that prices reflect all publically available information.
Derman: Yes.

I think Derman is wrong here, and this is important. Malkiel was arguing against Derman's conflation of a post hoc wrong price (ie, one that recently moved a lot), with an efficient price. According to this conception of efficient markets, every time anything significant is not foreseen, markets are inefficient. Fine, but I don't know any researchers who think markets are that prescient, so it's a straw man argument that doesn't help the debate. You can say that's the common conception among your colleagues, but that just means your colleagues like beating up straw men arguments in this domain.

Interestingly, even Eugene Fama chirped in the comment section to say, 'great interview [throat clearing!], but he doesn't understand these points.'
Posted by Eric Falkenstein at 5:49 PM

Is your model of risk not being related to return consistent with EMH?

My understanding is that EMH assumes all info including risk should be incorporated in the price.

I believe EMH has different degrees. Malkiel is a big believer in the Weak EMH, which holds that you cannot predict future prices based on current prices. It sounds like Derman was arguing about Semi-strong or Strong EMH while Malkiel was talking about Weak EMH. That is, they were arguing past each other.

What I've read of Derman is a very extreme interpretation of the EMH, which is that things like the mortgage crisis, or jumps in prices, are inconsistent with it. That is wrong. He needs to demonstrate that prices we obviously ex ante wrong.

As per my theory, I think a lack of a general risk premium is consistent with the EMH. The dominance to low volatility investing, however, violates the EMH for those of us who see the expected return and risk as we do, yet most people do not see it that way, so in the same way someone isn't lying if they believe it, most investors are not violating the EMH because they have deluded expected returns.

Derman's discussion of EMH in MBB is even worse than this interview makes it sound. The reader of MBB new to the subject could be forgiven for coming away with the impression that what the EMH says is that all prices follow an equal-probability binary tree.

I think CAPM is pretty much based on the notion that all risk can be captured by standard deviation. That's clearly not true.

I do in my book conflate CAPM with Efficient Markets, even though they are separate notion, and CAPM is more restrictive than EMH. But without a model of stock movements EMH doesn't have that much to say. I do agree that mostly you can't tell what's going to happen next.

Weak, Strong, Semi-strong, semi-weak -- we're not talking about theorems, we're talking about life, and some of these distinctions are largely quibbling.

I made some remarks re Fama below: http://www.econtalk.org/archives/2012/03/derman_on_theor.html#commentsection


At bottom, there is no absolute way to define value.

Emmanuel:
1) I wasn't too concerned with the CAPM EMH conflation, rather, the idea that EMH is correct implies prices won't fluctuate a lot. The mortgage crisis highlighted a lot of people were wrong pre 2007, but that included everyone--academics, regulators, legislators, and investors. We are probably collectively wrong on some price now (US Treasuries?), but that doesn't hurt Efficient Markets so much as show the truth is hard even on things that affect all of us a lot. Further, this error was more in the numerator than the denominator of the CAPM.
2) per the geometric brownian motion, what I should have said is what Fama noted, that adding kurtosis or skew or other parameters that capture fat tails doesn't really change the CAPM model's risk premium estimates much. So, you can replace the 'standard deviation' with something more complicated, and the output calibrates pretty much the same. See Levy and Markowitz (1979). Markowitz and Fama did a lot of work here in the 1960s--downside risk, sortino ratios--and this simply didn't matter because these measures are pretty correlated with standard deviation.

In any case, the reason so many CDOs were mispriced as AAA had nothing to do with misestimated expected risk (whatever that is), but rather, the expected return (which, with hindsight, was clearly negative).

Thanks, I do agree with you about CDOs error being in the return.

Point 2. is interesting -- I will look at Levy and Markowitz.

I am not sure exactly what Falken is talking about here: brownian motion is used to explain the assumption of random independent price movements, a necessary condition for efficient market pricing.

Therefore, I do not think he (Derman) is saying that "anytime anything significant is not foreseen, market's are inefficient".

What he is saying is, I presume, that because market movements are actually dependent and not random and independent, then accumulated risks cannot be unforseen and hence prices are not efficient if the market ultimately experiences a large price deviation in response to these risks.

Only if price movements are random and independent, which requires a general equilibrium dynamic under uncertainty, can large price movements be associated with market efficiency.

You can have any price movement in an efficient market under general equilibrium, although the frequency and the amplitude depend on the dynamics of the universe itself.