Egalitarians may be a majority, but they aren't close to 99%. This reminds me of the False Consensus Effect, which states that individuals view their own preferences, behaviours and judgements as being typical, normal and common within a broader context; it also suggests we find alternative characteristics as being more deviant and atypical than they actually are.

The blogger Psycasm did a survey, and asked them about their phobias, and compared them to what they supposed the percent of people shared these specific phobias, and got these results: 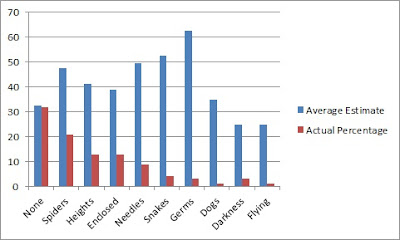 So, people who are afraid of spiders, dogs, and heights, vastly overestimate the prevalence of their specific phobia. Sort of like how economists, who have no alpha and are inclined to statistical optimization, assume all investors would invest as they would: presuming no alpha, optimizing mean-variance preferences. It's not a problem limited to proles.

I feel pretty calibrated, in that I'm pretty aware of my many beliefs that are a distinct minority. It doesn't bother me too much because I believe in meritocracy, which is inherently elitist. This not only is a minority view (at least in public), but it by definition considers 'common' to mean 'crappy' in most cases. As Aristotle noted, just because people are equal in some respects does not imply they are equal all respects; men are equally free, but not absolutely equal
We are a democracy, which means majorities elect the lawmakers, so it is important to have a majority opinion, especially if you want to pass laws that make people do what they would otherwise not (eg, pay more to strangers in Washington, not marry their partner, not own a gun). But there's no reason to brag about it, because it's merely a sign you can be a bully, not that you are somehow more enlightened:

The fact that an opinion is widely held is no evidence whatever that it is not utterly absurd; indeed in view of the silliness of the majority of mankind, a widespread belief is more likely to be foolish than sensible.
~Bertrand Russel

To disagree with three-fourths of the British public is one of the first requisites of sanity.
~Oscar Wilde

Posted by Eric Falkenstein at 5:01 PM

Anonymous said...
This comment has been removed by a blog administrator.
3:12 AM

" individuals view their own preferences, behaviours and judgements as being typical, normal and common within a broader context"

Falken, If I could appoint you dictator I would do it. You seem like just the sort of guy who would do a good job.

My first dictate: mind your own business.

I presume you are refering to the wall st protests when you mention 99%. That number is the % of people whose income is below that of $1,000,000. It's not an estimate, it's just a statement of fact. I am failing to see the logic of the post. Your argument would make sense if people making more than $1M were protesting and refered to themselves as the 99%.

Dan: Hey, I bet we both earn less than a million dollars. I guess that means I can spout any old opinion about the income distribution, and claim you agree because we're in the same insanely wide income bracket, right?

I don't see how what you wrote is relevant to what I said previously.
Whether we agree or disagree on some opinion X, has no relevance to you or I rightly or wrongly thinking that we are in income group A when in fact we belong to income group B.

Eric mentions Kanye West and others. They may sympathesize with the 99% and may even make political statements by saying that "they are the 99%", but this is different from answering a straightforward question in a survey. I bet if you asked large sample of those earning above $1,000,000 whether they are are in the 99% in terms of income, I bet the differential from their estimate and the actual will be significantly lower than the "afraid of germs" question.

I find that saying "I bet" before I make a baseless assertion absolves me of intellectual honesty of having no real idea of what the odds of my speculation are.

With that said, "I bet" that you're wrong. There was a great survey done of MER private banking clients back in the 00's and it was staggering how many people with >$5 million in invest-able assets considered themselves well outside of the top 10%, let alone 1%. Obviously, they're wrong. Also, the question of "how much money would you need to have to feel financially secure for life" was almost uniformly answered with a figure that was about double what they already had (whether that be $5 million or $50 million). I'll come back with the link to the survey if I can find it.

I'd bet plenty of people who gross $1MM in a year think they're outside the top 1% of income earners based on the above.

I don't get it, I thought money was meaningless, true wealth lies in ability.

"My first dictate: mind your own business."

In that case I would make you condo association president as well.

I believe in meritocracy, which is inherently elitist. This not only is a minority view (at least in public)

Do you have any data to back up this assertion?

I mean, my prior belief would be that most people are meritocratic. At least in the sense that if you asked most people how best to allocate jobs, they would say "give the job to the person who can best do it".

BRM: Be fair. At least one of us saying "I bet" had a tight confidence interval! ;-)

Dan: My point was really rather simple; I'm surprised it was so well-hidden. There is a small group of protestors who quite clearly do not comprise 99% of the population. I'm pretty happy guessing that opinion polls would confirm that their opinions are not shared by 99% of the population. And yet they claim to *be* the 99%, and making claims about reality and proposed policy. So what is going on?

Well, like good little post-modernists, we should be on our guard against a naked grab for rhetorical power. By setting themselves up as "the 99%", they are manifestly attempting to claim the support of all but a single percentile in the income distribution. The clear implication is that if you're in the bottom 99%, you should agree with Us, whoever Us is.

Look, suppose a bunch of X (white, black, whatever) folks set up a protest somewhere calling for the expulsion of Y (black, white, different whatever) people. And they carried placards which said "We are the X." I don't think you'd be defending them, saying "Oh, but they *are* X; it's factually accurate." You'd be infuriated -- particularly if you were X, too -- at the idea that these protestors could implicitly claim the support of anyone who is X for such an abhorrent, hateful policy. Well, that's exactly the rhetorical sleight-of-hand which is going on here.

As rhetorical devices go, there's only one thing less subtle, and that's a half brick flying through the air.

Reminds me of the old Mark Twain quote, "Whenever you find yourself on the side of the majority, it is time to pause and reflect."