Haidt on the Moral Foundations of Occupy Wall Street 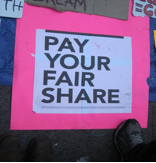 We really hate cheaters, slackers, and exploiters. By far the most common message I saw at OWS was that the rich (“the 1 percent”) got rich by taking without giving. They cheated and exploited their way to the top. As if that wasn’t bad enough, we the taxpayers then had to bail them out after they crashed the economy, and so now they really owe us for saving their necks. It’s high time that they started giving back, paying what they owe.

As a point of comparison, a similar look at signs found at the Tea Party rallies suggests that protesters there are also chiefly concerned with fairness. The key to understanding Tea Partiers' morality, though, is that they want to restore the law of karma. They want laziness and cheating to be punished, and they see liberalism and liberal government as an assault on that project. The liberal fairness of OWS diverges from conservative and libertarian fairness in that liberals often think that equality of outcomes is evidence of fairness.

Those who think the market is generally fair and rewards virtue, who think that unequal ability is primarily from effort, discipline, and finding one's niche, believe in markets; those who think the market is generally a rigged game that rewards vice, that people are basically equal and become unequal mainly through forces beyond their control, believe in greater government control. Equality of outcomes is justice in one case, injustice in the other. Given these different assumptions are responsible for the most pressing political disagreements we have, and these are rather factual statements, the nice thing is that someday there may be more agreement on politics.
Posted by Eric Falkenstein at 12:35 PM

The Tea Party is on the right track by being fed-up with the size and scope of government and OWS isn’t completely wrong in thinking that big parts of the system are rigged – but apparently they can’t figure out who is doing the rigging.

The elephant in the room at OWS is the government and to the extent that they don’t talk about the elephant the whole movement smells fishy to me. There almost certainly wouldn’t have been a real estate fueled debt bubble and collapse if the government hadn’t done so much to manage outcomes via home ownership. Equity market structure has become fragmented and opaque in the name of fairness (billed as competition and cheap access). Government agencies don’t enforce equity market rules (like NBBO) or acknowledge the Frankenstein of HFT (quote manipulation, sudden liquidity death, big$ physical access=advantage). Direct manipulation of both equity and bond markets are now a regular government function (QE, ZIRP) and the government is fused at the hip with a handfull of TBTF banks that control too much and put too much at risk. Plus, Obama’s quest to make the government even bigger, more intrusive and less predictable is simply killing an already very weak economy and taking Chicago style cronyism to new heights on a national level.
Go occupy Washington already.

Nice post, Eric.
Daniel Kahneman has a book just out, I am reading it. Looks as good as Happiness Hypothesis, perhaps even better.

Wow what a ridiculous oversimplification.

Equality of outcomes is only fair when there is an equal proportion of effort extended (which never happens) - the true measure of fairness isn't outcome - it is consistent and proper accountability for behavior. The good news is that this will ALL be settled eventually and it will be fair. Till then, we need to establish the most fair system NOT based on outcomes (not fair for me to have forgone luxuries because I didn't treat my home like an ATM but now have to bail out those that did), but based on rewarding behavior we generally agree to be beneficial to society (sounds like a can of worms, but it really is doable). How about rewarding honesty, punishing dishonesty - the kind of stuff you think about when raising kids. Living within one's means. Consumer credit should be significantly more restricted. Where are the mandatory finance classes/training in school - we're growing the next generation of overextended borrowers without parents and teachers including this in their curriculum. Raising awareness of how my $20 wasted on junk I don't really need (or when really honest want) has consequences. Smarter buying will stimulate and reward essential producers and instead of everyone having iPhones, we'll all have (get this) homes paid off free and clear. It's obvious which is more essential (there's no app for a roof over my head), we just need more conscientious buyers - they truly run the economy. We (99%) have more power than we realize to fix this problem, we just all need to realize we are not pawns of advertising and marketing schemes or even of the Jones' buying habits (with their accompanying debt).

Some of the wealthy got there by cheating. I agree there's plenty of evidence for that.

The top 1% are wealthy. I agree as well, it's true by definition.

Therefore the top 1% must be cheaters. ...and that's where the logic breaks down.

I note that Michael Moore is trying to get honorary exemption from the top 1% for his good deeds contributing to "progressive" advocacy. No doubt George Soros will be claiming the same before long. But of course this 99% business is just a rallying cry... tribalism... it's not supposed to mean anything.

Needless to say, there's plenty of poor people who also cheat the system. People who work for cash and don't pay tax. Prisons full of people who committed a crime but weren't smart enough to get away with it... streets full of drug dealing gangs who haven't been caught yet. Then there's the flash mobs, and so it goes.

The real problem is that our current system, as it stands, is broken, corrupt and overall the cheaters do pretty darn well out of it. I'm starting to think that there's a sizable percentage who don't actually want it to work properly.

I'd disagree with your characterization. I think that unequal ability is largely from genes and uncontrollable environment, yet the market remains the best way to allocate resources. Hence going to the DMV sucks.

The Irony of the OWS movement , in London at least, is that the thing they are really upset about is the greater equality that is appearing. The vast majority of these protestors are now facing higher energy bills to pay for the Green Politics they all voted for but expected "the rich" to pay for. At the same time some (but not many) of the benefits they receive are being cut. Thus while the drones in suits walking by to work every day pay no less tax, equality means those sitting around St Paul's in tents who currently pay no tax now pay something and while the drones still get no benefits, the protestors get a little less generous welfare than they did. The irony of people who currently pay nothing demanding others pay their "Fair share" is not entirely lost