To put it technically, the “new Keynesian IS [investment-savings] curve” is an asset pricing equation, one of a form very close to those exposed as empirically deficient by Hansen and Singleton. Efforts to repair the asset pricing theory are part and parcel of the important project of building an econometric model suitable for providing quantitative guidance to monetary and fiscal policymakers.

I don't think this approach will work because I don't think standard asset pricing theory is near correct, and I'm not a fan of Keynesian macro models either. But here's an asset class that highlights why macro is in such a futz, why such different macro views can be held simultaneous by smart researchers: you can't reject their different priors.

Interest rates are probably the oldest and most liquid prices we have, and there are several facts associated with the basic risk-free yield curve:
This latter point is especially important, because it seems the short term real rates is small (<1% and positive), over the past 100 years, though it varies quite a bit decade to decade. Most researchers think this series is not trending. This is inconsistent with any utility function other than those with 'constant relative risk aversion', a special set of preferences that imply 10% risk to one's wealth feels the same regardless of wealth. As real gdp per capita in the US rose 760% since 1900 through 2011, this seems the only logical conclusion. The most important thing to understand with yield curves is that the high quality of US bond data since 1953 makes this sample very prominent in research, and it has a very particular pattern, rising up to 1980, then falling, in concert with inflation.
US Interest Rates and Inflation: 1953-11 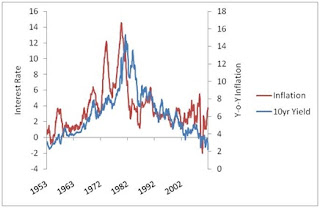 As bond returns are a function of their current yield, and the price appreciation from changes in market rates, the rising interest rate environment had low bond returns, the falling had rising ones. This leaves a tale of two regimes, and it isn’t clear whether the low real returns by maturity prior to 1980, and subsequent reversal subsequently, was an ‘expected’ return, or both period were unexpected. 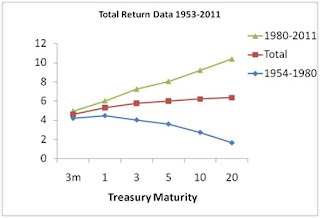 Economists were just as surprised by the movements in yields over the past 40 years as anyone. I worked in a bank economics department from 1987-9, and can tell you we had no clue we were in a period of secular interest rate reduction, and that those same economists lamented their poor forecasts throughout the 1960’s and 70’s. In the 1990’s, 10-year inflation-indexed yields average about 3.5% in te UK, and exceeded 4% in the US around2000, and declined until a spike in 2008, and currently (2011) are below 1%. These movements are, in the words of Campbell, Shiller, and Vaciera (2009, Understanding Inflation-Indexed Bond Markets), a puzzle.

Keynes’s (1930, Treatise on Money) argued that the yield curve should rise due to a risk premium, Modigliani and Sutch (1966, Innovations in Interest Rate Policy) argue that there’s a habitat preference for interest rate investors, so that some prefer longer bonds, but most shorter durations. With the development of the stochastic discount rate factor, risk premium were supposed to be a function of covariances.

To test the yield curve then, we can look and see if we can explain the pattern across maturities or time, of the real return (the nominal return being trivially higher in higher inflation environments). The standard covariance factors are consumption, and the stock market. Consider the following 'betas' with the S&P500 and Real Consumption Growth range from -0.1 to 0.1, with an average of 0.05, depending on what periods (53-80 vs. 81-11), time horizon (daily vs. 60 month investment horizons), real vs. nominal returns, whether we are regressing against consumption vs. S&P500 returns. The point is, the data here are too noisy to confidently say that short, or long term Treasuries are 'risky': there's always a different view that says something different.

Looking at this over time perhaps shows the problem more clearly: 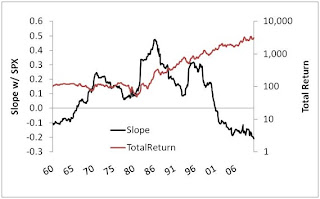 The lower returning early period, and the higher returning later period, do not show a clear distinction in the bond's S&P500 factor loading, and so it is with all the various permutations of these data.

The bottom line is that inflationary periods have lower bond returns than disinflationary periods, though it is not clear whether these are expected, and thus true risk premium. There is no obvious risk premium explanation of the 'default free' spectrum of bonds across maturities or time, and any statistical analysis that purports to say it all makes complete sense is clearly torturing the data (eg, see Bansal's 'long run risks' model that adds a bunch of parameters to explain more datapoints).

This is especially relevant to macroeconomics because in the standard New Keynesian models, a representative agent’s Euler equation that links a one-period real interest rate to the consumption growth rate is the IS curve central to the policy transmission mechanism. A long list of empirical failures come from applying the stochastic discount factor implied by that Euler equation. Until someone succeeds in getting some kind of consumption-based asset pricing model that works well, the New Keynesian IS curve is empirically vacuous.
Posted by Eric Falkenstein at 6:24 PM

I love the second chart; been trying to think of a way to visualize. Keep up the good work.

Inflation as measured by CPI doesn't quite tell the whole story and I don't know about 1953 but The Fed is currently manipulating rates in big way.

The problem with "real rate" analyses is the timeframe mismatch.

Matching today's 3-year nominal with the annualized inflation rate from some point in the past to today, is a mismatch.

You do NOT know what the next three years' worth of annualized inflation WILL BE in order to match it to today's rate.

You could look at what 3 year rates were three years ago and match it to what inflation actually did over the last 3 years, but that doesn't tell you what the real rate is NOW.

So I recommend DISCARDING the term "real rate" accept the fact that our analyses of nominal rates to inflation rates are deeply flawed, and continue from that point, knowing we are building castles on swamp.

This is a really interesting and insightful article, thank you for posting it. I think the best thing for all of us to do is just make sure that we are doing all we can to manage our finances so we know what is going on! I have been using an investment analysis software called Statpro which has helped me in analysing my value-based estate, litigation support, and acquisition activities. Even more so the most helpful tool I have used is the Asset pricingwhich have really come into use when trying to assess my mortgage.