US MVP Year to Date 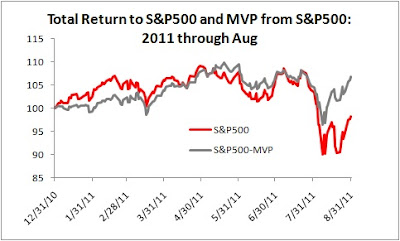 I have my own set of MVP and low volatility indices over at betaarbitrage.com. Here's the MVP drawn from the S&P500, compared to the S&P500 this year. It had a very good August, primarily because it has only 50 stocks from within the S&P and one of them was Motorola (that generated 1.5% to the index in August). So, it's up 13% more than the S&P for this year, whereas prior to that, from 1998 through 2010, it outperformed only by 4.8% annually. An it has about a 0.5 beta, and about 18% less volatility. Basically, it outperformed because of standard tracking error, being a subset of 50 stocks, so I don't read too much into one month.

I'd like to find the other MVPs and see how they compare, as I bet over short periods like 8 months they vary a lot. One distinction of mine is that I totally ignore industry concentration, and just take the 50 stocks that generate the lowest portfolio variance (estimated on 3 latent factors using the prior 252 business days). A lot of people add industry limits, but I find that double counting. It is not as if any industries have an obvious 'size' or 'value' effect, and to the extent they are correlated that should be addressed in my algorithm. So, que sera sera, industry-wise. I think it might be my special sauce relative to all these newcomers.
Posted by Eric Falkenstein at 7:24 PM

You are always very insightful from a mathematical pov. What are your thoughts on the 200 day moving average?

If you were forced to own only Vanguard funds, are there any that you think should outperform the market based on your theories?

How about bond funds?

I have followed your advice for the last two years or so and it has worked out very well. Basically I have levered up low beta low vol stocks and am getting larger upswings on up days and smaller downswings on down days. Very clear alpha across all time scales!

Just want to know what your current portfolio looks like, since I respect your views a lot. So, if you don't mind on divulging your top5 holdings, I'd be very curious!

I have an emerging market MVP for tracking purposes. Lots of constraints. All stocks are fundamentally vetted by in house analysts. There are country, sector, and position size min/max limits. I also apply some minimum characteristic limits. End result was that it underperformed the EM index same time yours did, outperformed same time too, and is up YTD. Now have a year and a half track record of clearly superior returns and sharpe, but nobody is brave enough to offer it to actual clients because of self-recognized behavioral biases internally and among clients against anything using the word "optimize". So I'm now avoiding the word.

I run a US Low Vol portfolio drawn from the S&P 500 universe, but the portfolio was only launched the end of April, 2011. Since inception, it has outperformed the S&P by 10% with daily volatility ~28% lower than the SPX. I constrain for GICS sectors (absolute weight) and somewhat limit concentration in single securities. Eye-balling the chart, performance on your portfolio looks broadly similar to mine, although I lack the Motorola bump...