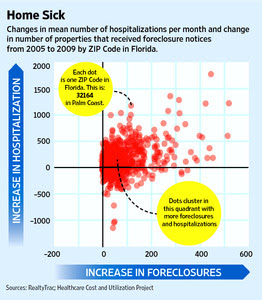 Of course, everyone knows the cliche that correlation does not imply causation, but in practice any correlation that fits into a narrative is seen as evidence of that theory. This NBER paper by Currie and Tekin argues foreclosures lead to a variety of bad health outcomes--sort of like the symptoms of chronic fatigue syndrome. It's a joke, but sure got a lot of play over the past few days because it's so darn helpful to some people. See the attached graph, which underlies their findings. The NBER, like the American Economic Association, is a pretty official, bureaucratic, PC trade institution that wants to be relevant and respected.

This is the same group condemned The Bell Curve for producing arguments directly to a public that could not understand statistics as well as trained economists, an absurd proclamation that would eliminate all working papers and books. Econometric technique is much less important than one's biases, which is why we should have 'free-market', 'Marxist', and 'Keynesian' econometricians, just like we have Republican and Democratic pollsters. It's not like a lifetime Keynesian/supply-sider, at age 50, will suddenly publish a paper documenting that fiscal multipliers are exactly opposite to their preconceptions. It's the meta-decisions of what to look at, what to control for, that fall outside any formal statistics that determine most interesting conclusions, not some asymptotic distribution on moment restrictions.
Posted by Eric Falkenstein at 8:00 AM

I guess I'm a little confused... are you saying that a priori it is absurd to think that economic events and health outcomes are related? Are you saying that there is an obvious control variable missing in their analysis (I have no interest in paying $5 to read a paper that you are not recommending)? Are you saying that they shouldn't have published this working paper? What is the relevance of a review of the Bell Curve written nearly 20 years ago by two different writers?

I guess the point is that everyone just has preconceived notions and is incapable of accumulating and assessing empirical evidence to change their beliefs, and while that may be tolerable if everyone in the world simply agreed with you, that isn't the case?

It's the kind of piece that has so many omitted variables it is meaningless. Clearly Social Economic Status is correlated with health, but then, the really interesting point is 'in what way?' Foreclosure per se is just correlated with, in this case, bad neighborhoods, primarily in the southwestern US, and there's a lot going on their in terms of regulations on health care access that affect its variation and the demographics of areas we know had high foreclosure rates.

The Bell Curve piece highlights that the NBER and AEA are institutions that generate lots of standard PC results with the patina of rigor. They are the ones that led the charge to NINJA loans because they supposedly proved that requiring things like a down payment and a job was irrational discrimination.

A perfect example of confirmation bias is your insistence that the complete collapse of lending standards can be blamed on political correctness. Markets can never fail, they can only be failed by the fear of being branded a racist.

How many hundreds of millions of dollars is Angelo Mozilo worth? (Most of that money came from Acorn, no doubt.)

Don't get me wrong, markets failed, but so did regulators, legislators, nonprofits, investors, originators, academics...everyone! But businesses lost most in this, not those other groups, which is why mortgages now have the highest risk rating within their portfolios, and private mortgages require 20% again.. while federal agencies have not changed their standards much (3.5% down). So, the market, in aggregate, makes the same mistakes in aggregate opinion as any other collective, but they learn.

It is probably more correct to say that they have learned that without a government guarantee, the time has again come to actually follow sane lending practices. The whole debacle of the housing bubble was visible in very real ways when guarantors, e.g. fannie and freddie, who were widely known to be backstopped by the taxpayer, got in the business of legitimizing "no doc" loans to hairdressers in Phoenix, AZ in a bid to buy all the houses they feel they needed as an investment.

Speaking of confirmation bias, I like how one guy puts it - the lesson most people learned from the crisis is that they were right all along.

But businesses lost most in this, not those other groups, which is why mortgages now have the highest risk rating within their portfolios, and private mortgages require 20% again.. while federal agencies have not changed their standards much (3.5% down)

What does this have to do with political correctness causing the financial crisis/recession (never mind The Bell Curve or whether foreclosures cause poor health)? These issues aren't remotely as connected as you make them out to be. I guess other people's ideologies prevent them from seeing the obvious truth while your ideology allows you to achieve penetrating insights with a parsimony of ideas.

By the way it should be apparent to you at this point that the government's interest in the housing market extends well beyond its interest in protecting black people from racism... but virtually every comment you make about government involvement in housing refers to fears of racial discrimination.

My point is that econometrics is as objective as polling, in spite of its presumed objectivity. The NBER would never have allowed a publication stating that, say, increases in government services is correlated with poor health, though I'm certain there are many indicators of government services (free lunch, section 8 housing, etc.) that correlate with the above finding. It's obvious this is not causal, but more importantly there's no demand for that 'result.'

Dr. Falkenstein, your point is well taken, but usually in modern econometrics there is an attempt at clean identification: finding an instrument, or a natural experiment, to establish causality. (That these instruments are often very weak is an issue for another day.) I would have expected Currie and Tekin to use some instrument for their paper (NBER-gated so I have not read it).

If they did not, then it is inexcusably poor research especially in 2011.

But even instruments maven Steve Levitt ignores data outside his estimation, such as the increase in crime in 1990, the increase in the black/white crime ratio even though block/white abortions increased. So, instruments are not sufficient, the are applied piecemeal to data, allowing bias to manifest.