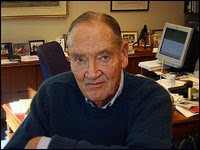 John Bogle is one of the founders of index investing, a very valuable tool still underutilized by investors. Bogle writes over at the WSJ:

The idea that passive equity management could outpace active management—then the mutual fund industry's universal strategy—was derogated and ridiculed. The fund, now called the Vanguard 500 Index Fund, was referred to as "Bogle's Folly." Yet today indexing has come to dominate the field. Over the past five years, index funds have accounted for 100% of all equity funds' cash flows, with assets now totaling $2 trillion, one-fourth of all equity fund assets.

The story is a good one. In 1951, the anecdotal evidence John Bogle--a mediocre student at Princeton--assembled in his senior thesis on the then-minuscule mutual fund industry led him to write that mutual funds “can make no claim to superiority to the market averages.”

In 1975 Vanguard was a shareholder-owned mutual fund group—the company was owned by the mutual fund investors—so low-cost fund administration was not taking money from owners, it was giving money to them. In contrast, the idea of an index fund would have hardly appealed to a high-cost fund complex whose very revenue depended on the conviction that active management did add value, at least, in their particular case.

In his pitch to the Vanguard board for starting an index fund, he brought some of his own data on the performance of mutual fund managers, suggesting that they underperformed by about the same amount as their expenses, and some references to recent articles by Paul A. Samuelson and Charles Ellis. So, blessed with some good intuition from Bogle, the rising popularity of the idea in the academy, timing, and good incentives from Vanguard, they had both the opportunity and the motive to create the first retail index fund, which is now the largest index fund in the world, and Vanguard, the second-largest fund family. By the next summer, the fund was launched with about $11 million.

While Bogle seemingly had the idea right all along, it should be noted that there were several missteps among the index founding fathers. John McQuown and David Booth at Wells Fargo, and Rex Sinquefield at American National Bank in Chicago, both established the first passive Index Funds in 1973. These were portfolios targeted at institutions. The Wells Fargo fund was initially an equal-weighted fund on all the stocks on the NYSE, which, given the large number of small stocks, and the fact that a price decline meant you should buy more, and at a price increase sell more, proved to be an implementation nightmare.

It was replaced with a value-weighted index fund of the S&P500 in 1976, which eliminates this problem. Another misstep was clearly not targeting the retail investor early, which turned out to be where the real money was. Rex Sinquefeld and David Booth started Dimensional Fund Advisors in 1981, in part to address this deficiency. Sinquefeld was also hooked into the University of Chicago, which had Eugene Fama as its head of research. As the size effect was the hot thing at that time, DFA had a small cap portfolio at the outset to take advantage of this anomaly. Unfortunately, the size effect disappeared in the 1980s, but Dimensional was able to survive this setback admirably. Thus, even a great, simple idea like an index fund, has a learning curve in practice.

Even good ideas like index funds are not straightforward, and take some interested care to make work. Further, as John Bogle showed, it was not until he was the CEO of a fund complex that he could implement his idea for a retail index fund, and even then he dealt with a skeptical board, and relied heavily on authority figures like Paul Samuelson (Sinquefeld and McQuown were also well-connected). Imagine if he were a bright-eyed young kid with merely a PowerPoint presentation and his own data. It is essential to have the right connections when you have a good idea, more so the bigger the idea.
Posted by Eric Falkenstein at 4:27 PM

The S&P 500 is something more than just market-cap weighted - there are soem *political* forces at play in that companies have to be voted into the index. I seem to recall that during the .com boom S&P dragged their feet about putting several tech upstarts into the index that would have otherwise qualified on value alone. Russell indicies seem to be more cut and dried in this regard.

There's still such a thing as positive alpha in many equity portfolios, it's just that the chances of your's being of the number that has enough of it to be worth paying for are pretty slim.

Also, I'm not sure that the popularity of index products is without it's downsides. It's a beta, beta, beta world out there.

Eric, you make it sound like passive investing is the greatest thing ever invented.

Buying the index or placing the money with some active strategy fund manager are both "passive" from my point of view. In both cases you just follow others without having done a real homework yourself. I don't consider portfolio theory to be much of a homework either - all these betas and volatilities are just sophisticated ways of following what others have been doing. You'd hope there will be somebody left who is doing some real homework and is not looking for some crowd to follow :)

The small cap premium went away in the 80s? Enough for Fama and French to write a paper showing it's empirical evidence along with the value and market premium?

But your right, a small company and a large company do have the same cost of capital...I forgot.

I meant from 85-90 the small cap firms underperformed...not that it was zero after the mid eighties. Subsequent return premiums have been around 2-3%.