Here's big Ben at a conference to Honor Milton Friedman in 2002:

For practical central bankers, among which I now count myself, Friedman and Schwartz's analysis leaves many lessons. What I take from their work is the idea that monetary forces, particularly if unleashed in a destabilizing direction, can be extremely powerful. The best thing that central bankers can do for the world is to avoid such crises by providing the economy with, in Milton Friedman's words, a "stable monetary background"--for example as reflected in low and stable inflation.

And here's his latest great idea:

The Federal Reserve will probably begin a new round of unconventional monetary easing this week by announcing a plan to buy at least $500 billion of long-term securities, according to economists surveyed by Bloomberg News.

Not only is this destabilizing, increasing the monetary base even more than it has been, but the Fed is now trying to fine tune the yield curve. Bernanke's praise of Friedman's work, which promoted stable monetary growth rates, remind me of Marx (Groucho, not Karl): "those are my principles. If you don't like them, I have others." Here's the monetary base, the only monetary aggregate the Fed has direct control over. We are in uncharted waters. 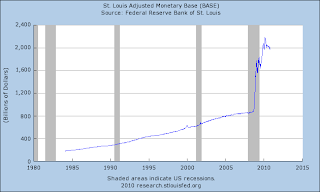 Posted by Eric Falkenstein at 9:37 AM

Eric's post is a complete misrepresentation of Milton Friedman's views. The Fed had three separate massive QE programs during the Great Depression, yet Friedman is famous for insisting that money was too tight in a Great Depression, as he was looking at broad monetary aggregates and nominal spending trends.

There was a lot of contractionary policy by the fed in the Great Depression. If you think Friedman would have approved of tinkering like this to increase demand, I disagree.

The monetary base doubled in the Great Depression, but Milton Friedman said more tinkering was needed.

Here is a good analysis that applies Friedman's views to the current situation:

Honoring one's ancestors is all very fine, but we need to move on. Friedman was working in the context
of primitive models such as the quantity theory.
We have better, micro-founded monetary models now such as those developed by Ricardo Lagos, Randy Wright, Stephen Williamson.
These are models that allow us to ask deeper questions about monetary policy.

Well, you have to admit those words were spoken before the Great Financial Crisis proved all economists were full of it...

--Charley (Not Karl either)

I follow the guys over at FFT check out their latest forecasts about the US elections. Spot on, they called the crash of 08' and are definatly worth a look.
http://www.forecastfortomorrow.com/news/2010/11/major-hit-us-elections

I think German Finance Minister Schaeuble said it best: "With all due respect, U.S. policy is clueless"