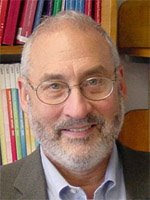 In April I wrote about what an 'idiot' Joe Stiglitz is, because he's always making the same point to justify a greater government control and I wanted to use the word 'idiot' prominently in a blog post. Luckily, I did not waste the appelation on an undeserving person or incident. Remember, Stiglitz believes that because of asymmetric information markets are not necessarily perfect, government is more efficient. If the latter part of the proof is not clear to you, join the club.

Stigtitz gives speeches every other day, literally, which really causes brain rot, because so often seeing people appreciate you repeating yourself, you forget that you are a prop, and your repeated argument is not new, convincing, or true. All they want is to make money off your brand name. Conferences need a draw, and you have name recognition they need you regardless of your wacky calls for a one-government solution to Global Warming via e-chips implanted in our shoulders. At lunch people will be talking about Kobe Bryant and Star Trek's latest movie, and the organizer will be happy that he had a good attendance.

Anyway, back on March 31 in the NYTimes Stiglitz used his laser-sharp mind to highlight that Geithner's then-latest bank plan was a massive give away to banks and the investors in the plan. The government was socializing losses and privatizing gains. His example suggested a 54% return to investors, a -40% return to government. If true, you would expect a stampede of investors.

The Wall Street Journal reports almost no one is interested. By revealed preference--a test made prominent by Stigtlitz's mentor Paul A. Samuelson--it's not a good deal for either banks or investors, so either he made a math error or had flawed assumptions. I noted at the time this was not a give away, primarily because government was a pari-passu partner, not mere senior debt, in the deal. With modest assumptions the leverage on mortgage pools did not generate sufficient convexity in the payoff to generate the massive return asymmetry he suggested. And more importantly, government has given many signals that any assistance implies a large, undefined amount of government ownership, from compensation caps to H1-B visa restrictions, overseas investment restrictions, and Elizabeth Warren.

I found a PR newswire from what appeared to be Stiglitz's ghostwriter on his website. It said:

Usually my strong opinions aren't falsifiable in any time period near when anyone remembers what I said, so this is a little uncomfortable for me. I was way wrong. I have to rethink my fundamental assumptions about the relative efficiency of government.

Markets fall short of perfection, but so does government. To point to market imperfections as proof of the need for government intervention is a naive fallacy, whereby we compare theoretical imperfect real markets to imaginary governmental institutions that lack the smallest imperfection, as if I would compare my 60-year old wife's imperfections to Beyonce's body combined with Amy Freed's wit. That's a rather irrelevant comparison, in retrospect.

Looking at the interweb, I used the google to find a vast literature exists on the imperfections of government in allocating resources. For instance, Detroit has been run from top-to-bottom by government-loving Democrats since the 1970's, and yet it still has lagged neighboring cities. Who knew?

Posted by Eric Falkenstein at 8:27 PM

Stiglitz is the only prominent figure with a good plan about how to deal with the banks, resolutely ignored by Geithner, et al. He's a very smart guy, with an open mind and very good ideas.

You, on the other hand, are a hating waste of carbon, who deserves to be burned as fuel. Allow me to bring a match.

Well, I'll agree that 'nationalization' is a plan.

If you burn a 220 lb organism, you will be adding CO2 to the atmosphere, and wreck the planet. Instead, have your henchman bury my corpse, creating a true 'carbon sink'.

Stiglitz IS an idiot, for he knows not what he knows not. Don't you love it when you're proved right???

The link to a WSJ article that supposedly offers evidence of lackadaisical interest in PPIPs instead points to a NYT Oped.