Perimeter Institute to Save Economics 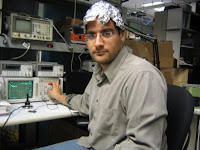 The Perimeter Institute sponsored a conference on how non-economic scientists and mathematicians can address the recent economic crisis. As we all know, economists did not forecast this crisis. Non-economists, those outside the sway of convention economic dogma, saw it a mile away. Where have these models been? A clue was provided by one Eric Weinstein in a panel discussion:

I've more or less tried to keep a low profile the best I can, for the last 20 years, because it hasn't been a very safe environment to talk. And finally, we have in the United States at least, a President who openly calls for nonbelievers to be brought into the big tent...we are at the beginning a hopeful period perhaps...We have been through a generation of a very low intensity sort of McCarthy era were instead of the House Un-American Committee ... we have had Fox News, we've had Lee Atwater, it's been very intimidating to talk, things have changed...

The idea, I guess, is that our economy was run by some sinister cabal, and now with The Chosen One in charge, we don't have to fear jack-booted thugs that previously impeded financial reform and intellectual progresss. I guess a lot of good ideas were kept in the closet because of frequent Bush/FoxNews intellectual waterboarding.

This was at the Perimeter Institute, a Canadian group of physicists, that at this conference to create a Manhattan Project for economics. Interestingly, Nassim Taleb was there, effusively praising the audience, even though he harshly criticizes scientism and excessive mathematics, the modus operandi of the Perimeter Institute. So if the charlatans and idiots who mistake the map for the territory do not include Andy Lo, Emmanuel Derman, Paul Wilmott, physicists doing economics, or Danny Kahneman, it's not clear what group of those doing economics he is talking about. These guys span the gamut of ways to address economics, and are hardly minority views. If these guys get a pass, I don't see who doesn't.

Taleb's schtick is merely to harshly criticize 'conventional wisdom' as practiced by those outside his listening audience, flattering his listeners that those morons don't get it like 'we' do. Though I find this very dubious reasoning, clearly his popularity as a speaker and writer suggest this is an effective rhetorical device. If you are well-known and say nice things about Taleb, he'll exempt you from his list of idiots and praise you. If you criticize the significance of what Taleb is saying, he'll call you an idiot (or, if you don't have a Nobel prize, just threaten to sue you, write your boss to get you to stop saying mean things, etc.).

Taleb mentioned some guy who said an event that should have happened once every 10 thousand years happened three days in a row. Clearly, this guy is describing a bad model, and if he really meant it, he is not very smart. I don't see how damning this is for economics, because most good economists I know recognize that financial time series have fat tails. But, when people pay $50k a speech, they expect to hear revolutionary ideas, and without straw men the ideas seem much less revolutionary. The idea that if you take a time series with fat tails, and process it with a very nonlinear function, it will be very hard to predict the outcome, is rather obvious. OLS, variance, are all meaningless. I don't get it. What is the alternative, extreme value theory? Chaos theory? For many things, you get similar results, because variance is correlated with extremum, and for many other applications the standard errors are so large and non-robust to small changes in parameters you can't use these models. On the other hand, like Winston Smith in 1984 I have been intellectually waterboarded so much, I'm incapable of seeing why this observation is so revolutionary (plus, I'm on the Haliburton payroll).
Posted by Eric Falkenstein at 3:14 PM

He is right. It is stupid to add reserves (fat) and redundancy (two eyes when one could do) instead of "Predictive Power" (prophetic vision). Those who wanted predictive power were repressed under Fox News's terror regime. But now PP is about to be set free and the economic atomic bomb will be dropped on the Fed.

Nassim Taleb had his uses as a purveyor of excuses for the also rans like myself who never made money in the markets. I suspect that much of his popularity is due mainly to this factor. The gist of his trading method is apparently to make a real killing on exceptional days. I suppose it worked for him but one needs a tidy sum to handle the other whiplash days. Don't get me wrong: the financial markets are havens for devious characters and I have few good words for them. But Taleb should lay down his shtick of being the cultured one among barbarians

Eric, I appreciate very much your points on Taleb. After reading his Black Swan, I had missed how much he was interested in becoming a guru himself, rather than criticizing others' behavior.

More generally, the same way the press failed in calling the crisis, I feel journalists are now failing in explaining why experts are so keen in giving their opinions. Admitted, this is minor, and yet, if we were all aware that they take $50k for a speech, their actions would appear much more selfish than they pretend to be. Rather than a disinterested intellectual trying to help society, we would see a rational individual aiming at maximizing his own benefit. Unless I am missing something here.

As one of the speakers in the workshop portion of the conference I can state that neither Wilmott nor Kahnemann were there, and Taleb was not paid anything other than having his expenses covered. He was there because I arranged for him to be invited there.

His fee might have been waived, but clearly Taleb has no problem with Wilmott or Kahneman, who are his good friends. He co-authored a paper by Derman, a pretty inside-the-box practioner. But then unctuously praising mathematizers like the Perimeter Institute while condemning those who make assumptions? At what point does inconsistency chaif? He says nice things about Russel Roberts, too, because Russ has nice things to say about him. His criticisms against economics, which strongly condemns most practitioners, thus excludes traditional, and nontraditional economists. This is an inconsistency, which if you think Taleb has insights about the truth, things that are new, true, and important, is a clear counterpoint. I think it shows the lack of profundity, or even seriousness, in his critiques. That people like Wilmott and Derman hold him in high regard suggests, in my opinion, their sway to anyone powerful (ie, popular). It's lame.

Were you there? I do not know who you are, but quite a bit of what you are saying here is simply wrong.

Derman and Taleb wrote a paper together, but do not see eye to eye anymore.

Taleb goes back and forth on people. I was on his hit list for quite a long time; now we get along, but, who knows, maybe tomorrow not.

I would agree that it is somewhat curious that he showed up, given some of his criticisms of some of the approaches that some there take. But, there were a variety of people there from a variety of disciplines, expressing a variety of views. Again, were you there? If you were, was it only for the first day and its big public show? The workshop the next couple of days was where the real discussions and serious stuff went down.

Is your only interest to poke at Taleb and any contradictions you can find regarding his views and other views at the conference?

If you (and your readers) were not there, I suggest you go to http://pirsa.org/C09006 to see the full set of presentations, with the workshop ones showing vigorous debates (I gave one). I suggest you check on this further before commenting further, although, of course, if all you want to do is bash Taleb, that will not interest you.

That post actually was primarily criticizing Taleb, and I thought the Weinstein quote was so absurd it was funny. My 'bashing' is not jealousy-based ad hominem, it takes seriously his proposition that economics is mainly useless because it models things precisely, or that fat tails exist, or that uncertainty is different than risk, or peso problems. These issues are real, but his solution is to throw the baby out with the bathwater, and his belief that out-of-them-money options, especially in very undefined areas, are 'undervalued', is exactly wrong. On average these option are overvalued, as people pay too much based on hope. Sure it was great to be long out-of-the-money puts in 2008, but over time that strategy does not have good returns. That so many people he calls an 'idiot', either indirectly or directly, he then buddies up to later, I find rather distasteful. That Taleb so consistently engages in mutual admiration with people doing what he writes is fraudulent, stupid, or moronic, says a lot about him and those who seek his rather cheap praise. I wrote about these concerns here.

I was not there, but did watch a few presentations, including yours. I did not feel inclined nor qualified to comment on all of them. Many were interesting, which is why I watched a several, but I did not see a specific idea to work with, in part because some referenced papers or equations that I could not see. But, Roubini going over his domino theory on how everything is going to blow up, I find boring. Lo makes very cautious extensions into psychology, and good luck to him, but I think that hasn't been very fruitful, just full of potential. In your talk, you highlight many issues in econophysics, and that was interesting. But then you briefly mentioned a model of heterogeneous agents that explains crashes. That would be most interesting to me, but not much about it was said, what drove the model, what it attempted to explain, etc.

In general, I'm skeptical of non-economists doing economics because they tend to attack straw-man criticisms of economics. As you note, economists and climatologists are getting together in their projections related to anthropogenic global warming, but I think this has not been very fruitful. The models tend to be the same, lousy, Keynesian and/or input-output models from the 1970s, so it is not making economics better, it is gloming on to a technique that would be better left alone.

Read your book review. Mine was more favorable initially, lots of fun, but I also came down hard on his proposed barbell investment strategy, invoking Bondarenko's paper, which got him very upset. His argument was that I did not know what he or his company had actually done, which was a fair shot.

What moved me to make peace was goign back to The Black Swan and rereading his argument about the barbell. In fact, he does not pose it as a way of making lots of money, although he may have said that in other fora. He posed it as an insurance policy, how to avoid losing lots of money.

Of course, barbells have been around for awhile, although the more typical ones from say a decade ago involved putting half one's money in Treasuries and half in wild growth stocks or junk bonds. His proposed one had most of the assets in Treasuries, and a much smaller percentage in his puts on big crashes.

You can access the paper you were curious about at my website at http://cob.jmu.edu/rosserjb. It is probably about to be accepted at a major journal, but really cannot say more at the moment. It is titled, "The Period of Financial Distress in Speculative Markets: Interacting Heterogeneous Agents and Financial Constraints" (with Mauro Gallegati and Antonio Palestrini).