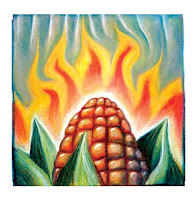 Ethanol is a popular biolfuel because it is the main crop of Iowa, the key primary state in presidential politics. A big debate is whether the energy used to grow the corn and then process it, is greater than the amount of fuel produced. David Pimentel of Cornell states that ethanol from corn in the US needs 25,000 kcals of energy to create 19,400 kcals of energy, for a net cost of 29% in BTUs (it takes 1.29 BTUs to generate 1 BTU of ethanol). In contrast, Bruce Dale of Michigan State stated this metric was irrelevant, and besides, applied to oil would generate a net cost of 45% and (coal was 240%)! Slate notes that Pimental calculates gas as being a benefit of 527%, so they disagree profoundly on a very basic fact. Dale seems wrong intuitively because it can't cost more energy to generate oil and coal because otherwise we wouldn't have any oil and coal--if we lose more of it trying to get it we wouldn't have as much as we do--where does the energy then come from?

The debate seemed at an impasse of technical details, but I think we have a definitive answer. Recent research suggests it would be more efficient to actually burn the corn, rather than process it and use it as fuel. From Bloomberg:

Burning sugar cane or corn to make electricity for powering cars may be smarter than refining the crops into biofuels.

Clearly we are defining biofuels down if they are now best used like dung in some African village. By the transitive property, if burning corn is better than turning it into ethanol and burning it, oil or gas is more efficient than ethanol.

The new DOE chief, Nobel prize winning scientist Steven Chu has noted that ethanol is probably not the way to go. Too bad we put in this massive infrastructure to process corn as a fuel, including multi-year mandates, subsidies and tax credits. One big problem with government solutions, is that like the education quagmire, the solution is always more money.
Posted by Eric Falkenstein at 5:42 PM

That's a clever (and obvious in retrospect) insight. Simpler is generally more efficient. That's why a Small Revolution is making more sense every day. Unfortunately, though, you're right, once a certain way of doing things gets entrenched in the government, it's hard to go with something else, even if it's better, faster and cheaper. At least it's a good sign that more people have become aware of all the problems associated with "too big to fail."