Not the Time to Own Good Junk 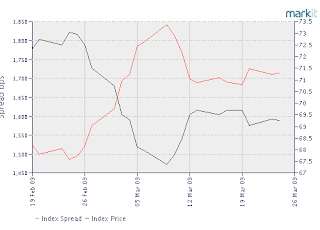 Currently, high yield bonds (aka junk bonds) have spreads of around 1200 basis points to Treasuries, though that is a rather unfair benchmark given that AA rated bonds trade at about 300 basis points to Treasuries. The graph is from Markit's B-rated bond index. Note spreads are 17%, which is insane. In today's crazy markets, everything is suspect.

But these securities trade with very large bid-ask spreads, many at 10 points. With a median price of around 68, that's a 15% loss if you buy Monday and sell Tuesday. This kind of bid-ask spread makes relative value trading impossible, because it is simply too expensive to go long and short a large number of securities and make money off any edge in forecasting future performance (even ignoring the difficulties of shorting many HYBs). Any reasonable relative value edge simply cannot overcome the costs here, because while if you pick and choose one bond, you can be patient, if you have to go long 30 and short 30, you will have to cross that spread a lot.

The only reason to be long a high yield bond is thus either 1) if they have a really good feeling about one particular company or 2) it is part of a basket of long HY Bonds. In the second case, going long HYBs as a sector, it is probably cheaper to simply buy a junk bond ETF (eg, JNK or HYG). Any edge in relative value would probably be eaten up in the idiosyncratic costs of overhead, bonus, and transaction costs. The only ones putting relative prices in place are those taking one-off bets, or the effect of tilts with large long-only portfolios. But here's a problem. If you are long a portfolio of HYBs, or a particular HYB, you are bullish. If you are bullish, you are expecting spreads to contract, prices to rise. The crappiest HYBs will rise faster than the better ones, because they are most distressed. In 2003, the best performing HYBs were the worst as measured by most objective models (eg, Merton Model, defprob). Similarly, one could have noted that in 2003 those bonds with the lowest prices rose the most proportionately--they have really high betas. This was a situation I was monitoring very closely at the time because I was contemplating a HYB strategy (luckily for me, I didn't implement it for reasons outside my control).

So, currently, as spreads are at a historic max, I think it would be imprudent to be long the better credits. Only in good times or the beginning of a recession, is it good to be long the cream of the crop.
Posted by Eric Falkenstein at 5:27 PM

JNK and HYG have been trading at a small premium to NAV for a few months now. I wonder how you even calculate NAV when the bid-ask spread is 10 points.

Wouldn't a good strategy be to be a market maker, just put some limit orders inside the boundaries of the bid-ask spread?