Leverage and the Crisis 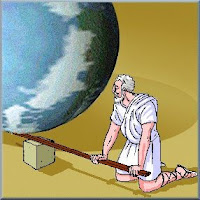 The recent crisis has created a cottage industry in articles with various primary culprits: hubris, too little regulation, government encouraging lending to poor neighborhoods, credit default swaps, Viking machismo, copulas, regulatory capital requirements, value-at-risk, the Basel 2 regulator accord, Greenspan's easy money, too-big-to-fail, Chinese investment, asymmetric bonuses, the repeal of Glass-Steagall, and finally excessive leverage by financial institutions. Leverage, what the Brits call 'gearing', is the ratio of assets to equity (think Archimedes) I have worked a lot examining bank default models based on financial ratios, and how ratings, equity returns or spreads relate to leverage, and for banks there just is not that much there historically. Leverage, historically, is not a very powerful indicator of financial performance for financial institutions (it works for nonfinancials, however). Not that it does not matter, only that leverage ratios observed represent equilibrium solutions to various problems, and the residual cross sectional correlation is generally uninformative. The nature of the assets and liabilities is orders of magnitude more important than what the balance sheet shows, which is why I do not actively trade financial institutions. Bank financial statements are too opaque to be useful, a problem that has really exacerbated this crisis because they now find they can't demonstrate they are not insolvent. 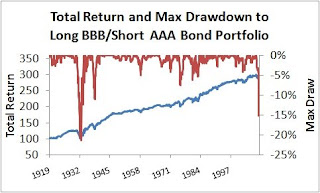 Note that on average, you make money in this strategy. Indeed, this is a prominent financial puzzle, because the return on this trade represents a higher return than generated via standard utility functions. That is, the annualized Sharpe ratio is about 0.4, which is around what it is for the stock market, which itself generates the well known 'equity premium puzzle'.

Note also that the drawdown to such a strategy varies over time. It was about 20% in the Depression (1930's), and recently experienced a 15% drawdown. One can imagine someone thinking the Depression is no longer a relevant benchmark, in which case, a 6% drawdown is a reasonable worst case scenario. Now, most investors apply capital of around 3 times the worst case scenario, which means, using the lenient 6% worst case scenario, 18% capital. The return, per year, is merely 1.4% annually, so a 1.4% return on 18% in capital (these are a function of par bonds at work) is about 7.8% return on economic capital, which is generally not a good investment for something with so much uncertainty. Thus, while on a Sharpe ratio this may seem a puzzle, given the leptokurtosis (fat downward tail) in bonds, one should not base the risk capital as a function of the standard deviation, but rather, a stress test, which in this case makes this a bad trade (alas, utility function theorists focus on standard deviations). The strategy makes sense for banks only in the context of a product that is 1) not market to market and 2) generates auxiliary revenue via servicing of the loan.

Thus, I am truly puzzled that many banks ended up, basically, with a highly levered position long high grade mortgages funded at the bank funding rate (usually A rating), because even if this crisis did not happen, and the BBB rated Mortgaged Backed Securities did not experience defaults, the mark to market from standard variations in the BBB-AAA spread makes it a loser for investors. I suspect many backed into this trade as UBS did, via first acquiring the securities to repackage into mezzanine securities sold at fat margins, but then were stuck with the high grade securities, and rationalized this as not a problem by looking at historical BBB default rates and ignoring the mark to market. In any case, they should have had a leverage ratio of 5.5:1 (1/0.18) if they want to 'arb' the AAA-BBB spread, so the really high leverage rates of investment banks implies they were not looking at the spread volatility, irrespective of default rate and housing price assumptions.

But is this a key to our financial debacle? Did they merely take on 30 times leverage to arb some thin investment grade spread? Looking at investment bank leverage ratios (assets/book equity), we see that Lehman, Merril, and Bear Stearns were all around 30 in December 2007. Yet, they were around these levels in 1995. Sure, some, like Citi and Morgan Stanley, moved up considerably over that period, but these moves were the exception. Thus, in general, there was not a big increase in leverage, as it was confined to a handful of investment banks. Nevertheless, we do see a relation between leverage and stock returns. Using all US investment banks with market cap over $1B in 2006, and looking at stock returns from 2006 to present, we see a modest, but significant, negative relation. Higher leverage implies a higher future market decline. 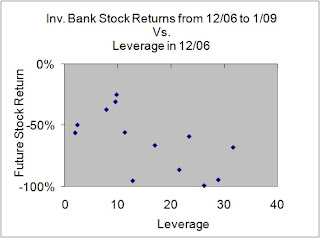 But these are investment banks, and when someone on television says 'banker', they usually mean 'investment banker', which is a very different animal. Bankers have modest incomes, and except for the highest echelons, are not not your quintessential Masters of the Universe. They understand the nitty-gritty of underwriting and servicing loans, as opposed to trading and making deals. The leverage ratios of commercial banks, if anything, went down over the past decade, from an average of 12 to around 10. Most banks are commercial banks, not investment banks. We see little relation between leverage in 2006 and subsequent stock market performance (using those US banks with market cap greater than $1B in 2006). This is a typical banking relation, where book leverage, in general, is not correlated with things like ratings, spreads, and other financial performance metrics. 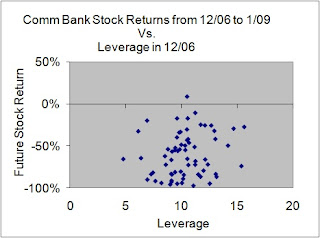 Thus, I think the investment banks that warehoused significant amounts of market traded BBB rated debt were making a bad trade, and were much too highly levered to make this trade. This seems to explain some of the problems for these firms. Yet, most banks were not increasing leverage, and there is little relation between the leverage and future returns we see in commercial banks, as both have lost about 60% in market cap since 2006. So although leverage has some relevance, this is a second order consideration in the big picture.

The key is the quality of the mortgages, and for investors looking at financial statements, there was basically zero meaningful information on how the nature of mortgage assets changed for banks back in 2006.
Posted by Eric Falkenstein at 5:57 PM

Fascinating...I wish I knew enough to understand everything you're suggesting.

don't think so. The mean is positive.

Sorry, do not concur.

The bottom line is that banks (no distinction between comml or IB) did not adhere to strict underwriting policies, largely because either a) they did not intend to hold the mortgages, or b) as mortgage holders they felt compelled to compete with the big conduit players.

Banks and investors relied on LTV as first way out - which as we know is always a mistake. Assets are only worth what someone will pay for them - unless they are cash flow generating, assets do not have inherent value.

The other issue, which goes undiscussed, is the CDS debacle. There are roughly $20 trillion in corporate and mortgage backed debt securities outstanding. Yet there are $56 trillion in Credit Default Swaps - or 2.8x the entire traded debt market. The counter party risk of such a pervasive, mispriced, and unregulated market is staggering, and we will feel its effects for years to come. Leverage ratios of banks and I-banks do not accurately reflect this risk - and therefore are grossly understated. This is a market that really only took off starting in 2002 - so comparing recent leverage levels to that of the 1990s is non-meaningful.

Yes, the mean is positive (for now). Not trying to be negative--I like your blog, which has a different slant from most of the other ones I read--but doesn't the Martingale strategy yield positive results--until it doesn't?

I think the key change in quality of mortgages was that consumers began to use the non-recourse nature of their mortgage as a put on the home's value rather than a put that was excercisable because of a reduction in their income.

Foreclosures were high in the rust belt for several years prior to foreclosures being a problem. The problems only began after California and Florida started defaulting on homes that were underwater enough to have effectively no chance of returning to positive equity. Also, there were lots of anecdotal stories about strategic games played in default (buying a new home at lower prices, moving to the best of several homes to go bankrupt, etc).