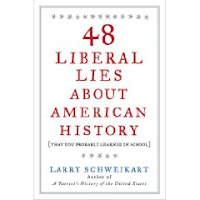 Do you know which images are used more often than any other to represent 20th century America in modern textbooks? If you guessed the moon landing, or John Kennedy, or Ronald Reagan, or even the civil rights marches – go to the back of the class. The correct answer is: the Ku Klux Klan

Get it, the best picture of America is of stupid, evil racists. That's our legacy, our essence. As opposed to Haiti, or Liberia, or Namibia, Cambodia, Uruguay, etc. Where's the sense of perspective, of prioritization? Why do we worry so much about illegal immigration if we are so bad?

I think its so stupid for intellectuals to think that the West is so uniquely evil and bad. After all, everyone--black, white, jew, muslim, protestant, catholic--has more freedom in the West than in most of the world. American intellectuals love highlighting how evil we are, where 'we' means 'those other idiots'. That our textbooks highlight McCarthyism and the Klan in history compared to its actual importance in day-to-day life, its sins relative to the alternative (Nazism, communism, tribalism) shows how secular America loves the concept of original sin. Live in a village in the Congo, and see how tribal they are, how backward, but their backwardness is somehow better because it is more authentic. It's silly. The west is highly imperfect, but its better than most of history, and the entire third world in terms of economic and social freedoms.
Posted by Eric Falkenstein at 9:17 PM

I agree whole-heartedly falken, those "liberal" bastards just don't get it. Keep up the good work!

The press has also not reported on the steps that Saddam pre-arranged to hide and destroy WMD if there was a US invastion.