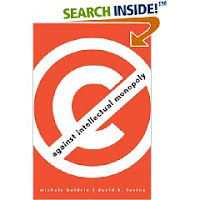 A neat book on Against Intellectual Monopoly by Michele Boldrin and David Levine, makes an interesting case on James Watt, inventor of the steam engine. Watt, basically, created the idea of a separate condenser for the standard Newcomen engine. This is good. But he got a 30 year patent in 1775, and steam engine productivity stalled for the next 30 years. This is because any improvements in the steam engine would necessarily involve a separate condenser, and thus, violate the patent. Fuel efficiency for steam engines was unchanged during the period of this patent, then increased 5-fold in the next 25 years.

In classic histories, Watt is a heroic inventor ushering in the Industrial Revolution. In this telling, he was merely one of many inventors trying to improve on the existing Newcomen engine, and once he was one step ahead of the pack, he remained ahead by exploiting the legal system.

This kind of history is fun to read, because often one's understanding of ancient events or people is superficial, and learning thing were quite different is fun. As someone who has spent a lot of time and money for my right to use 'mean-variance optimization' among other common tools, I know how costly it can be to defend oneself against an assertion something is proprietary, because everything is related, and so potentially derivative. If you are rich and petty get a good lawyer, and you can make people suffer, or win big: eg, a current case against Nintendo asks for half the profits from the Wii based on a patent violation, and clearly a 5% chance of half their Wii profits is worth a mere $25 million investment in litigation.

Most intellectual property law is inefficient, because it diminishes competition more than it spurs innovation. But not all is, and thus the opening for the hucksters who hide their monopolistic intentions, or just plain bad faith; behind an idea, that sometimes, in some places, has a good effect. So often something that is good in moderation in that if some is necessary and optimal, is taken to excess.

This is a very well written book, with neat ideas like how the idea of property rights is different than intellectual property, in that my right to use my property, is much different than a patent or some such contrivance, which are rights of prohibition of others. He is describing modern day con-men, shakedown artists appealing to an analogy that does not hold. There are men who try to ruin others lives on the pretext of property rights, to garner monopoly rents. If you are unaware of these situations, consider yourself naive or lucky.

Boldrin did hard core theory when I was acquainted with him at Northwestern. It's great to see him write such a good, non-technical book.
Posted by Eric Falkenstein at 9:09 PM

"James Watt As Intellectual Monopolist: Comment On Boldrin And Levine"

In their 2003 Lawrence R. Klein Lecture, Michele Boldrin and David Levine argue that intellectual property rights may be damaging to social welfare. As empirical evidence for their theory they offer James Watt's steam engine patent, claiming that it delayed the Industrial Revolution by as much as two decades. We show that this claim, as well as the more general claim that Watt's story supports Boldrin and Levine's theory, rests upon a distorted summary of the historical record.

funny thing is watt almost went broke and had to sell 2/3 of the rights to roebuck and then boulton.

As one earlier comment has already pointed out, the history of the steam engine is a bit more complex than this book lets on. Among other things, the origin of interference proceedings (a unique aspect of American patent law) arose from the competing claims to priority over this invention.

Second, and more importantly, I think it's worth pointing out that most or all historical arguments against IP should weaken as transactions cost of communicating new ideas get cheaper. This can seem paradoxical to some. But when it costs almost nothing for a corporation to check a website to see whether an engineer or scientist has already done the work that they're thinking of investing R&D time and money in, then it makes sense for us as a society to give everybody incentives to use that website! It's really the same justification we use for any system of property rights. There's nothing special about intangibles.

In my industry, probably 90% of the R&D spending would not be spent if it were impossible to obtain IP rights for inventions. (Unlike personal investing, in my field it is very easy to reverse-engineer a product once it is made.) Thus, I would not agree that IP rights are damaging to social welfare overall, although it's difficult for me to conceptualize all IP so I am biased by my own industry in making this judgement.

Incidentally, I think fear of litigation and the corresponding over-cautiousness is a huge obstacle to innovation and productivity growth.

This is a bit off topic, but:

I found your blog via one of your critiques of Taleb, and have recently become very intersted in learning more about finance. Since you seem to know what you're talking about:

How would you recommend that a smart person who knows very little about finance but who knows a bit of microeconomics learn finance on their own? Specifically I'd like to be able to understand the activities of hedge fund managers, stock brokers, how financial systems work in general, regulatory and legal issues related to finance, how comlpex financial 'instruments' work, how to value companies and read their financial statements, etc.

Someone else recommended that I read books like "The Predator's Ball", "My life as a Quant", etc. I am looking for more than just a superficial understanding though, and am not afraid of math at all. I am hoping that there are a handful of textbooks I can read to learn this stuff.

Check out Trading and Exchanges by Larry Harris who I believe is a former chief economist at the SEC.

elliot: hmm. It will take time. Malkiel's Random Walk down Wall Street, Siegel's Stocks for the Long Run. I think Bernstein writes well, but he wayoverstates the success of certain ideas, or the relevance of certain ideas, or ignores various inconsistencies. But a well written bad book can be very useful (Capital Ideas, Against the Gods; Jack Schwager's Market Wizards books).

Take finance courses, statistics, read daily columns on market activity from the Wall Street Journal or some such press.

Thanks Dan and Eric. I'll read your suggestions.