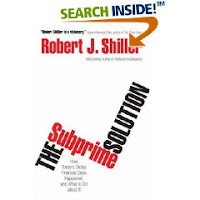 The latest financial guru to call the housing bubble is Robert Shiller, famous for actually calling the internet bubble in real time. But his latest book, The Subprime Solution, seems to imply that he called the housing bubble. I haven't read the book, but blurbatious Lawrence Summers says "Robert Shiller is two for two in predicting and identifying bubbles that will burst". The WSJ book review notes "He was among the first well-known economists to predict that the U.S. housing boom would end with crashing prices." These comments are lacking concrete references.

So I'm looking at Irrational Exuberance, 2nd edition, written in 2005. There's a neat graph of housing prices from 1890 to 2005, and there is a sharp increase in the years 1997-2005. But then there's lots of 'buts', 'ifs', and 'yets': prices went up a lot after WW2 and didn't collapse, the rise is much less than the internet bubble, etc. The most definitive statement he makes is that 'housing is looking like a bad long-term investment relative to the stock market'...but then immediately qualifies this by noting the tax benefits of owning a home, and the implicit dividends of living in a home.

He was intrigued about the home price increase, but that's about it. He gave the typical economist 'on the one hand...on the other hand...' prediction. He was not 'short housing', just wary about its long run investment potential, which one could say about everything.
Posted by Eric Falkenstein at 8:19 PM

I am the webmaster of some mortgage and real estate related sites and my sites are doing fine in major search engines. While searching in Google I have found your website and as we both are in the similar field I would like to exchange links with your site.

So if you are interested then kindly send me your link details. I will activate your links within hours.

If you are not the concerned person, then kindly forward this mail to the webmaster concerned.

Waiting for your reply to come.

N.B: -- This message contains personal, privileged, and confidential information and is intended only for the individual named. If you are not the named addressee,you are NOTIFIED not to disseminate, distribute,re-transmit, copy, or utilize this e-mail, and contents herein. Please notify the sender immediately by return email if you have received this e-mail by mistake. You are FURTHER NOTIFIED to delete this e-mail and any attachments, as well as any copies made thereof, from your computer system(s). The sender does not accept liability for any errors or omissions in the contents of this message and unless explicitly stated otherwise, does not intend to give legal advice or enter in an attorney-client relationship.

now shiller? falkenstein is an absolute crank --a failed, bitter crank. a failed academic, a failed trader, a failed person. Why shiller? a new obsession?

Well, it looks like he did succeed in pissing you off. Maybe that was it goal all along? BUZZ OFF YOU BITTER HACK.

courageous anonymous blog commenter: you learn more from your critics than you do others. But the criticism has to rise above ad hominem declarations.

first jim morrison above, now this. cant keep a clean blog on the intertubes anymore. show me his IP, I'll send a packet his way (maybe more pks)