Ugh. Clearly, my call to buy Fannie in June was bad. But ex ante, I don't think a bad pick. The logic was that the company had $800B in assets, and twice that 'off balance sheet', meaning their guarantees. If they had a 50% chance of surviving, which seemed reasonable, because even the worst C rated companies default at 20% levels. And a viable Fannie is worth $40B at least. But they did fail, so it was a bad pick, but I did say to buy financials in general. I was wrong on that company, but I stand by the logic, and the rule.

Investment banks in general have actually flat lined since June, as shown below: 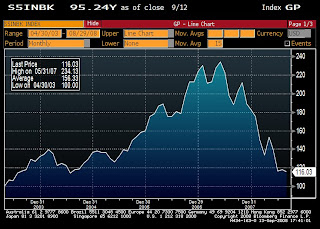 Regional banks have rebounded, in general, as shown below: 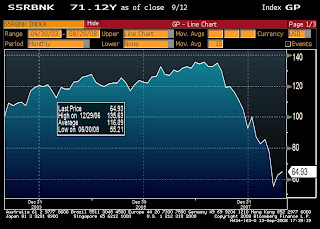 I'm looking at mortgages for a project I'm working on, and do not have all the data yet. Basically, if the prices from the ABX indices on subprime lending are correct, many companies are insolvent. But it is not clear these indices are correct, that is, a bottom up calculation of mortgage portfolios would be helpful. It appears that mortgages were really bad for those issued between late 2005 and mid 2007. The question is, how much are these worth, as a percentage of par, and what percentage of mortgage portfolios containt theses vintages. That's an empirical question, and we have a good estimate of their loss curves, which were really bad for 2006, and twice as bad for 2007 (really really bad).

Unfortunately, the government takeover of Fannie and Freddie may make things a lot worse. Already their have been calls to have a moratorium on foreclosures, which just lowers the values of mortgages, prospectively, and lowers housing prices because it keeps unowned properties in limbo longer, and an unowned property is a cancer to its community. This is like the depression policies that turned a downturn into a depression. Hopefully, these efforts will be rebuffed, but if not, it will be a classic case of good intentions leading to a worse outcome.
Posted by Eric Falkenstein at 5:31 PM

i get the feeling it's gonna melt next week, lehman or no lehman. at this point even 'innocent' chinese money won;t buy the junk that's on balance sheets and aig hasn't even started yet.

Anonymous said...
This comment has been removed by a blog administrator.
7:52 AM