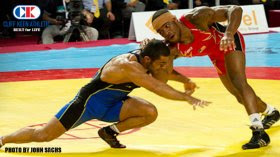 That is, men's freestyle.  Greco-Roman wrestling I find too subtle, witness Iran's heavyweight  defeating a Russian on a pretty weak move (a push out where he started on top). It's just a very strange way to wrestle, and the US got shut out to boot. Note America's best wrestlers (eg, Dan Gable, John Smith, Cael Sanderson) have all wrestled freestyle, because that is more like the American collegiate style.

And don't get me started on women's wrestling, which I think is fine except it often gets equal space in big media outlets like Sports Illustrated or NBC, even though there are about 200 times as many male wrestlers or female soccer players per female wrestler, making the best women wrestlers not very elite relative to male wrestlers or your average female athlete.

I think Burroughs has raised Herbert's game, and really hope he can win because Herbert's a very personable guy who would be a good ambassador for the sport. Burroughs has been awesome lately, but everyone is good at that level (Denis Tsargush of Russia and Sadegh Goudarzi of Iran both could win).

Michael Novogratz of Fortress helped raise some money, so American wrestlers will get $250k, $50k, and $25k for Gold, Silver, and Bronze medals.

Better to see amateur athletes who make real sacrifices to achieve greatness get compensated as opposed to NBA players who think they should be paid more in the Olympics despite their ridiculously large contracts.

Although based on some of the cash burn I've seen out of a number NBA players maybe Wade has a point.

I’m fired up too!

I was a B+ wrestler in an extremely competitive high school program/league back in the day. It’s a great combination of individual and team competition (at that level) and there are few activities that will put you in better physical shape. It was also the hardest thing I've ever done on a pure, self-discipline basis.

Despite being a much loved, ancient and cheap sport that pretty much minds its own business many high school/college wrestling teams have been devastated by Title IX mandates. I cringe whenever I see that high end, women’s clothing/lifestyle catalog by the same name pop through the mail slot.