Over time, “maximizing shareholder value” became viewed as the primary task of the corporation. And, well, you can see the results all around you. They’re not pretty.

For some reason, he thinks a profit maximizer maximizes short-term profits at the expense of longer term ones. Now, that's easy to see with hindsight applied to various trades we all should have made in 2007 (where were the NYTimes articles castigating easy mortgages prior to 2007?), but I would say that the private sector is much better at stopping things that have only good short-term effects than government. For example, only the government offers 3.5% down home mortgages, as if that idea really needs more data. Then there are regulators, who as Ted Gayer and Kip Viscusi point out, focus on their concerns to the exclusion of all others, so now we have an ethanol mandate that has the US creating fuel out of the most expensive carbohydrate to grow and process: corn.

I help coach my kid's wrestling and love watching it. It's a great sport for teaching those classic virtues of courage and discipline, and like hockey is more responsive to practice than sports like football and basketball that are more reliant on exceptional genetics. This year's Olympics were fun to watch because the two US champions both had signature moves they reached for repeatedly (for Jake Varner the ankle pick, for Jordan Burroughs the double leg). They highlighted a key to success is not being best at everything, but rather, having a specialty.  Another life skill. 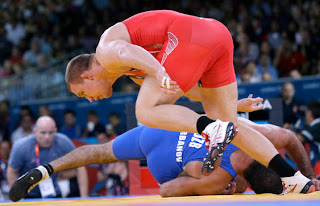 Watching wrestling every 4 years at the Olympics is interesting because it keeps changing. For instance, this year there were two bronze medal winners in each weight. In 2004 Women's wrestling was added. There are now three separate periods, so scores are not cumulative (eg, you can win by having periods go 1-6, 1-0, 1-0). A five-point throw automatically wins a period.

But all these rule changes are pretty minor in big scheme of things, and very few of these rules made the sport that much better to watch (the tie-breaking rules are insanely lame). Olympic wrestling is still a niche sport because scoring is still too subtle, which makes it hard for outsiders to appreciate.

In contrast, mixed martial arts (MMA) has exploded over the past 20 years, mainly because the Fertitta brothers who run the largest MMA league are expert businessmen who understand both the sport and business. They are now billionaires, and have created a brand that competes with professional boxing. 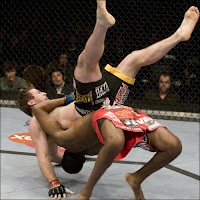 The secret sauce has been competition, in that several MMA leagues developed (K-1, ExiteXC, Strikeforce, WEC), so the one with better excitement prospered. The basic product, human combat, is a perennial, so it was really about combining well-known sports (jiu jitsu, wrestling and boxing) into a single one.

Amateur wrestling is run by old men who aren't trying to get rich, and that's its problem. Interestingly, the profit motive didn't just create an incentive for more violence, but also greater safety, because they realized that nothing would damage the brand more than extreme injuries. In the first UFC bout in 1992 there were only three rules: no eye gouging, no biting and no groin strikes. Now there over 30 rules acquired through experience. For example, you can't kick someone in the head if they are on the ground, because this is a very dangerous strike.

Amateur wrestling is run by experts who try to satisfy many different stakeholders, is especially deferential to tradition, and is only weakly influenced by revenues.  MMA is run by businessmen trying to create something people want to watch, and success is the present value of bottom line profitability.  As in so many cases, the combination of profit seeking and competition is the optimal way to create a better product, which is the path to productivity growth.
Posted by Eric Falkenstein at 10:24 PM

I’m not sure this is simply a better mousetrap story.

MMA is clearly a better business sport but wrestling is a great school sport. I don’t think either will ever gain much traction in the other’s realm for both obvious reasons and the ones you describe. But that doesn’t mean the two can’t develop a robust symbiosis. MMA has obviously benefited hugely by making commercial use of school-bred wrestling talent. I think it would be a win-win if the Fertitta brothers used their lucre to support scholastic and youth wrestling programs across the country (maybe they’ve already figured that out). A lot of teams/programs/clubs could probably use the help.

In the background is a huge potential culture shift away from football as massive, class-action concussion litigation against the NFL becomes a real possibility and many schools drop their football programs. Even Tom Brady’s dad is on record recently saying he’d probably try and steer his son away from football if he were a kid today. Building and marketing the NFL in the 60s and 70s is a great business story but perhaps the landscape has changed and suddenly football is no longer the best fit for either schools or business.

The combination of profit and competition in banking => excessive risk taking.

here is one of the good Online Food Deals site in india: Online Deals in Delhi at Khaugalideals.com