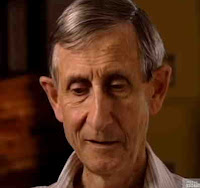 Posted by Eric Falkenstein at 2:54 PM

My intuition is that models are pretty hot, if a bit vain and arrogant.