UK Austerity in the 19th Century

I was watching Bloggingheads.tv, where Mark Blyth noted that contra Rogoff and Reinhart, Great Britain had a very high debt/gdp ratio at the beginning of the 19th century and then proceeded to have one of the best centuries of absolute growth in the history of civilization.  Thus, debt is, if anything, salutary at really high levels, so the government should run higher deficits, etc.  I've heard this argument quite a bit.  See this chart from Wikipedia: 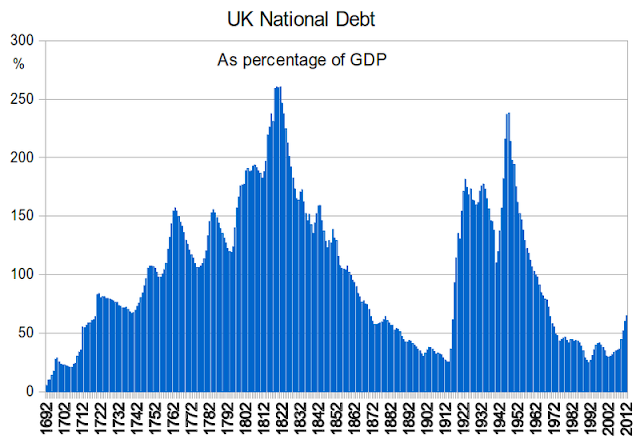 It peaks after the Napoleonic wars at 250%, well above the 90% number everyone has been talking about in the US. Note the clear decline in debt from Waterloo to World War 1.  This is because the government started to perpetually run a surplus (see chart below, taken from here).

After the big wars, they would run surpluses regardless of the business cycle.  So, was the prosperity from 1815-1914 caused by the debt in 1815, or the subsequent surpluses?  Given the debt was used to make war, I don't think we can say it funded the public goods like roads that then generated 1000% returns.

I like Kevin Williamson's argument that the US is bound to default, and that's a good thing.  Increasing the state doesn't create prosperity, rather, it first takes people out of the productive sector, then increases resentment because people given housing vouchers or make-work jobs know they are low status, undeserving relative to a billion other souls in the world.  Better to let people find their way by getting out of the way.
Posted by Eric Falkenstein at 7:56 PM

They need to look at total debt... Private and public debt to GDP in uk including entitlement programmes is north of 500pc

The UK did have an unusually high level of leverage, yet borrowed quite inexpensively. I think this was related to its empire status. Its citizens and the country had vast wealth producing assets overseas, and the UK government borrowed from the overseas wealth owners to partially finance the safekeeping of those assets. I suspect that if one consolidated UK activity around the world, debt relative to that wouldn't seem so high. (They also had centuries of history paying their debts, rather than defaulting, while overseas assets were pretty good collateral).

I'm pretty sure the UK government wasn't borrowing to finance consumption until it established the socialist/welfare state until the 20th century. After which it did default on its debts by falling off the gold standard and generating inflation.

I think the correlation, if any, is backwards, i.e. 1800s Britain was tremendously inventive and dynamic so they were *able* to pay off massive war debt.

Few would say the US can grow our way out of debt today.

I agree that debt is salutary at high levels. You have to either default (and be unable to borrow again) or cease borrowing to service the debt.

Either way you have to live within your means thereafter, which precludes the massive debt-financed expansion of the state - particularly of the welfare state - that we have seen.

If debt levels are high, and debt service payments are high, government cannot spend high even if it wants to.

Don't pay down the debt. The Stupid Party will just run it up again, and claim they are "investing in the future". Keep it as high as you can and cut taxes instead. (This is the story of the UK's present day debt).

Britain had a good uncommonly advanced level involving leverage, yet lent quite inexpensively. I do believe this became associated with their kingdom reputation. The residents as well as the region experienced vast wealth making assets international, along with the United kingdom government borrowed in the abroad success keepers to somewhat fund the actual safekeeping of those assets.