Overconfidence may cause people to invest too much in volatile stocks because such stocks have a greater diversity of beliefs, and so if people dismiss the objectively bad odds of beating the market, such people will be drawn to stocks where they are in the extremum, and highly volatile stocks have the most biased extremums.  One might think these people are irrational, but in the big picture people with this bias actually have a huge advantage, why Danny Kahneman said it's the bias he most wants his children to have.

Two economists at Washington State University looked at twitter accounts for sports prognosticators and found that confidence was much more important than accuracy in generating followers. Their sad conclusion: Pundits have a false sense of confidence because that's what the public, seeking to avoid the stress of uncertainty, craves. In other words, to be popular (read: successful), you need to be unwarrantedly confident. This takes either an amoral cognitive dissonance or ignorance.

In an separate study, two psychologists found that people were introduced to strangers and then asked what the other person thought of them. Those expressing more confidence about their interaction later (not how well they did, but how confident they were in how well they did), generally made a better first impression as rated by the other person.

It's hard for me to accept that life is like dancing, where it's just as important to be skilled and show no self-consciousness.  Supreme self-confidence is attractive in almost every important dimension: punditry, sex, sales--just not investing.  It's surprising there aren't more bubbles.
************************************************************
There's a reality TV show on restaurants, and it exposed a married couple who ran one restaurant as being especially wicked and incompetent (Amy's Baking Company).  The owners responded to complaints on Facebook and showed the world what insolent, self-absorbed idiots they were.  Of course, the popularity of this PR disaster has translated into a big success, as supposedly a new reality TV show based on the company is in the works.

That jibes with my observation. I guess I'm in the high SES group, generally, and among my weight lifting buddies, I'd say the vast majority are against redistribution policies, much more so than for my neighbors who come from the same demographic.

I'd like to think I believe in a smaller welfare state because it's truly the best policy, but maybe I'm just rationalizing self-interest. I think I'm not doing this, but then again, the guy writing this is right now is, in Jonathan Haidt/Michael Gazzaniga's view, just the narrator, the press secretary, of the 'real me', this illiterate part of my brain that has desires and beliefs at one of those Inception-like levels, where I think I'm objectively determining my beliefs, but instead I'm rationalizing a rationalization of a rationalization. 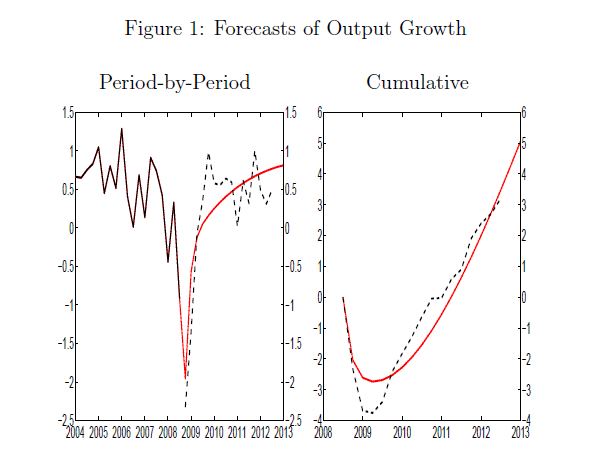 This is all 'out of sample', in the same way the test data for neural nets is out-of-sample: if you exclude all the hundreds of functional forms that were tried that didn't work, one of them was fit to only prior data and predicted the out-of-sample data. That is, the projection from 2008 is being done in 2013.  The degrees of freedom in this model would make a technical analyst blush. I can understand the allure of this approach (economics is about modeling), but anyone who has been around a while should cop to the patent overfitting that goes on 'outside the model'. I would bet anyone that if they set this model up in real time, it will miss the next turning point...and there will be another DSGE model that would have worked.
Posted by Eric Falkenstein at 8:13 PM

otoh...I always did better at Frogger when I didn't hesitate!

I want to see you and Taleb in a bench pressing contest.

Kudos to the grad students for getting published for "studying" sports twitter feeds.

God, I'm so embarrassed for the economics profession. They are painfully irrelevant and almost childlike in their self awareness.