The NFL combine is rather interesting, because predicting outcomes based on Moneyball-type inputs is very alluring. For everyone excited by some new statistic, there's another person who notes these don't capture what's most important.  The answer, as usual, is to use both metrics and subjective expert analysis.

An amusing new signal is an athlete's butt, the bigger the better.  Looking at little wrestlers I coach, a protuberant posterior is the best indicator of natural strength for these pre-pubescent kids.  Your gluteus maximus is your largest muscle, so I guess if you are going to focus on one muscle, better to look at that than biceps or triceps. 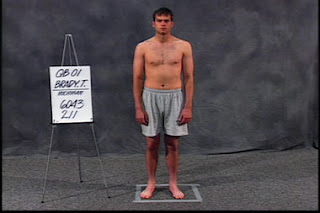 Tom Brady is one of the better quarterbacks in the NFL, and highlights and interesting modeling issue. He scored as pretty much the worst QB at the NFL combine: 5.3 second 40 yard dash, 24.5 inch vertical leap. If speed is one of your inputs, and your algorithm was a sequence of sorts, you would probably have eliminated Brady as a candidate because he was in the 1st percentile of speed and jumping ability. If your algorithm was more like a linear weighting, he could have compensated in other dimensions.

In general, I tend to like sequence of filters versus a linear weighting rule, though on large portfolios I find these rarely make a large difference. Yet, knowing that I could miss the equivalent of a Tom Brady in my sequence of sorts, made me rethink this a bit.  Then someone noted that while speed is important in general, a well-specified Quarterback model would give it sufficiently low weight as to not have it in the filter (eg, Joe Montana had poor speed).  That comforted me a bit.

Another thought was, unlike a portfolio, picking a quarterback is like picking a single stock, and for that, perhaps the sequence of filters is not optimal.
Posted by Eric Falkenstein at 8:34 PM

I bet he hates that picture.

Well, what would be the relevant metrics for a quarterback? Visual-spacial IQ score? Reaction times? Hand/eye coordination? Handsomeness?

I think I'd hire the QB who was best at hitting a moving target 60 yds. away no matter how high he could jump:

Maybe Brady's combine stats are so weak because it was actually Jim Carrey who showed up and used his name:

I think there's a huge bias towards whatever is easy to measure, instead of searching for meaningful metrics.

Check out the way the medical establishment has obsessed over height and weight in their determination to define normality. We have large datasets for these variables simply because we measure them a lot, which in turn is because they are easy to measure. The large datasets attract extensive research, which in turn creates the illusion that "height" and "weight" must be extraordinarily important.