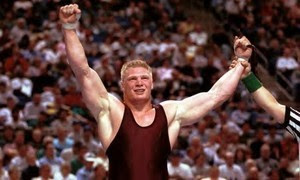 OK, here's a conspiracy theory. In 2004 they added women's wrestling along side men's to bring down the brand.  I've been to a lot of youth tournaments in the past several years, and there's perhaps 1 female wrestler for every 100 to 200 male wrestlers in grade school. Many lazy news outlets gave equal space to men's and women's wrestling previews so as not to discriminate, which is like giving Monaco and China the same space in Wikipedia because they are both countries. Yesterday the IOC decided to drop wrestling from the 2020 Olympics, while BMX, handball, pentathlon and trampoline remain.

Wrestling is not just a  sport but a life skill. If you can perform and defend a double leg takedown you have a huge advantage over your average street fighter, because transitioning to a choke that ends the tussle is then pretty straightforward. Then there are the cases where brawlers are basically hugging each other, in which case knowing throws and trips makes this a mismatch: wrestling is skill, you can learn moves that give one a large tactical advantage. Having the confidence from knowing you can physically defend yourself is extremely valuable even if never used.

Further, unlike team sports, in wrestling you have to master the issue of hating to lose but not being fearing it. Young kids cry a lot when they lose in wrestling compared to soccer or baseball. Unlike in team sports, losing is a direct assault on their ego, not merely because it's one-on-one but because the humiliation is not nuanced: some guy just pushed you around like a rag doll. Learning how to cope with unambiguous defeat is an extremely useful life skill that kids today are often sheltered from.

Yet, as wrestling declines, mixed martial arts like the UFC  rises, so the future is not horrible for the gist of my favorite sport.  Further, I never really understood the greco-roman wrestling rules as applied in Olympic matches. Human combat will always be interesting to humans, and  any competitive combat will have some peculiar rules like in wrestling, judo, or boxing, and those sports with the better rules will thrive, though perhaps not in the Olympics.
Posted by Eric Falkenstein at 8:14 PM

I thought wrestling was an event in the original Olympics.
What will they do away with next, running events?
An replace it with competitive texting?

This is so absurd. First Pankration, now this. Insane.

Agree with EF here completely although as an ex-wrestler myself I sometimes worry about my wrestling skills being a hindrance in an actual fight in some situations (I don’t think I’ve been in a real fight since high school). Obviously it’s better to have any martial arts skills than not but in wrestling you generally try and maintain contact with your opponent whereas in boxing you try to avoid getting tied up. Since most of my instincts in this area are (more or less) within the rules of wrestling I’m not sure I’d do too well against a non-wrestler but a good slugger who could really move on his feet. Then again most fights are pretty spontaneous and sloppy affairs and if I ever got my hands on the other guy it would soon be obvious whether or not he’s even aware of the fact that his own body weight can be used against him. Most guys aren't particularly.

I don’t think my view of the saccharine/PC/ribbon dancing Olympics could get much dimmer at this point. If the Obama administration is half as innovative and outside-the-box as they pretend they would help foster some sort of alliance with Iran’s serious wrestling culture and otherwise ***organize the community*** of interested parties in their appeal efforts. It’s not like they are above involving themselves in micro-issues.

As a former football coach, I noticed that kids who'd wrestled were better tacklers.

As a former wrestler myself, I agree that wrestling is great for character building.

The good news is, at least in the US, wrestling is growing at the youth and high school levels.

But I can see the politics of this in the IOC. Wrestling generates a lot of medals that don't go to the countries with the most clout. E.g. the Western Euros.

With all those life benefits to wrestling, imagine the advantages if you can dominate in the "Men’s 25m Rapid Fire Pistol" (an actual Olympic sport).
Furthermore, it's an olympic sport that Americans can kick some ass in.

I think this has to do with gender egalitarianism. Dropping a sport that is so integral to the Olympic spirit makes a joke of the entire institution and its continued legitimacy.