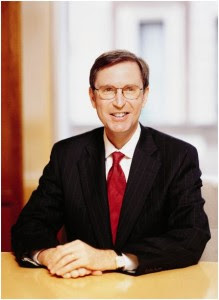 Glenn Hubbard was a major academic bank researcher when I was in graduate school, and later he became a Republican stalwart and dean of Columbia's business school. In connection with the lawsuit of monoline insurer MBIA against Bank of America and Countrywide, he recently gave this interesting deposition.


The plaintiffs are trying to prove Countrywide was negligent or even fraudulent in dealing with customers and investors. Hubbard is trying to support the proposition Countrywide did nothing wrong.  I'm kind of torn because on one hand, Countrywide was pushing the envelope of no-income/no down payment loans that made the bubble much greater than it would have been with mere monetary easing; on the other hand, Countrywide bragged about this for years, and their CEO Angelo Mozillo received many honors for expanding the home ownership to minority communities (eg, he won the American Banker's Lifetime Achievement Award in 2006).  What they did was stupid, but it wasn't a secret, and when it was happening it was encouraged by regulators, legislators, academics, community activists, borrowers, and yes, investors.

The key problem was not something really complicated in the copulas or a misplaced confidence on correlations, it was the assumption that housing prices, nationally, would not fall in nominal value, significantly. This outcome basically was assigned a zero probability, why the correlation assumption was allowed to stand. So, it wasn't really that subtle, but it was pervasive, and as we all now know, terribly wrong.

Anyway, Hubbard's post-mortem defense is that as Countrwide's portfolio did about as well as other lenders, they didn't do anything wrong.  He gets very testy, just as he did in the Movie Inside Job:


Q. You understand your obligation is to answer my questions to the best of your ability, including as the questions change, as they will throughout the course of the day?
A. I promise to be as nonlinear as you would like me to be.

Around page 48 of the deposition, the plaintiff lawyers try to get Hubbard to admit that all he did was compare Countrywide to other mortgage originators, so if fraud or misrepresentation was pervasive it wouldn't show up in his benchmark comparison of Countrywide performance relative to its peers.  Hubbard tries to have it both ways, saying at various times he didn't analyze underwriting, that he had no knowledge of what other lenders were doing, but also that Countrywide wasn't doing anything wrong because Countrywide's mortgages did as poorly as everyone else's.

The analysis Hubbard does is pretty straightforward. That he gets paid hundreds of thousands of dollars by many large corporations highlights that they are all paying for his brand name, because his knowledge of mortgage risk is pretty meager. The problem, however, is that everyone who really understands this market is clearly biased, but then, Hubbard is obviously biased too, so in a sense this is all a sham (get a big name to do pedestrian work that is purportedly objective).

Alas, this brings to mind the famous John Maynard Keynes quote, 'worldly wisdom teaches that it is better for the reputation to fail conventionally than to succeed unconventionally', or perhaps Schopenhauer's, "in a herd, we are free from the standards of an individual." Both are lamentable but true.  If everyone's doing it, it's hard to call this fraud or negligence, criminally defined.  Singling out bankers would be arbitrary, as these guys were not doing this outside the Matrix (Fannie Mae's DeskTop Underwriter front-end greatly expedited ninja loan underwriting, and they are a product of the Federal Government). So, while I think shaming should go all around, I don't see the point in criminalizing it because then you either fine/jail everyone, or arbitrarily scapegoat some minority group (here, bankers).

The bottom line is that Hubbard's correct in that there is less risk doing what everyone else does, regardless of how good or bad it is, precisely because it is impossible to punish everyone. That's why it's essential to have a Bill of Rights, so majorities can't steamroll unpopular minorities.

In any case, risk, in practice, is relative, the theme of my book, The Missing Risk Premium, which curiously implies a zero risk premium in general and a persistent negative premium to assets desired for reasons outside of standard models.

Relative risk means pervasive benchmarking and the importance of tracking error. It can lead to sunspot equilibria when everyone is going crazy like the in the internet bubble. Now, it's easy to say, you should not benchmark, you should target a Sharpe ratio, not an Information Ratio, but most people don't. I think it highlights that there's an easy way to beat the benchmark, avoiding the crowd any sticking with boring investments, but the key is you need sufficient reputation or capital to be able to do this without losing your job, so it's not so easy to do even if you want to.

Posted by Eric Falkenstein at 8:15 PM

"The bottom line is that Hubbard's correct in that there is less risk doing what everyone else does, regardless of how good or bad it is."

What do you mean? If everyone jumps out of the window there is less risk in following them?

Please clarify. Your statement is too general and based on posterior analysis.

Wow! I have to agree with this article. Especially when I read about the "The bottom line is that Hubbard's correct in that there is less risk doing what everyone else does, regardless of how good or bad it is, precisely because it is impossible to punish everyone." Great post!

yeah, thanks anon, I added some clarification. I did write a book on this, and it's pretty short and cheap, so I suggest you go there for more.

This is the only blog I check every day. Great work as usual.

Remembering the father of low-volatility investing

Also, based on the presented evidence, I don't think you can safely get to the conclusion that "there's less risk in doing what everyone else is doing."

It might be true in the case of your book, but certainly not when the market norm is absolute fraud. There are many lenders (a quickly growing bank in Texas comes to mind) who outperformed by simply not issuing fraudulent mortgages.

Just because fraud is the norm, doesn't make it less risky.

This is when absolute risk trumps the idea of relative risk—like anon implied earlier.

Bottom line, Hubbard is intellectually dishonest and a corporate shill. And Countrywide did many many things wrong.

Do individuals who committed outright fraud really require exoneration based on the (lack of) quality of their analysis? Bankers (and Hubbard) are not merely "unpopular minorities". They extracted enormous private benefit at great public cost.

Substitute "fraud" for "drug" in Matt Taibbi's HSBC rant last month and I think we'd be closer to the mark: How much should the fine be? How about all of it?

Do you really think that no one should be fined/jailed here? Lack of serious consequences creates an incentive structure for financial intermediaries that basically destroys society.

Also, I was a bit surprised to see you reference Schopenhauer and then the Matrix. Surely you don't accept the idea of world as will and representation?

This recent bit of research seems to support your view that risk is relative: http://papers.ssrn.com/sol3/papers.cfm?abstract_id=2197570