The US budget deficit has been large for quite a while, and there doesn't seem to be a lot in terms of revenue increases or expenditure cuts in the pipeline. Consider that in the latest budget deal, tax hikes will raise $22 billion this year, while the special-interest business and energy tax credits will reduce revenue by $65 billion.

Thus, I was surprised to see this chart from our non-partisan Congressional Budget Office around the internet, showing a mysterious big decline in the Federal debt/GDP ratio starting in about a year: 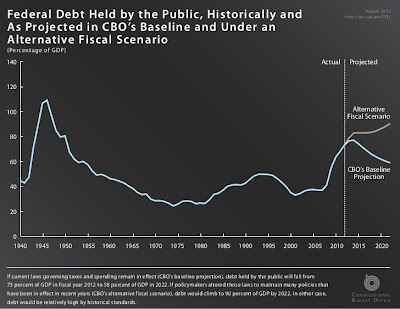 So, what's going to cause this trend to reverse course in a few months?  Two things. First, the Federal deficit is projected to basically halve every year for the next couple, getting to around zero in 5 years. As mentioned above, the profiles in courage recently displayed should give one pause, especially considering how a newly elected Democrat couldn't even cut the defense budget meaningfully.  Secondly, growth over the next 5 years will average 3.2% annually.

That kind of growth hasn't happened since the late nineties, or late eighties.  It's an outlier. How can they get away with that? Well, they put in a recession next year, so that would seem to suggest they are being pessimistic, but then this is countered by years of 4+ growth.

Economists are very bad at predicting business cycles. It would be far more honest to simply have a vector autoregression that projected a slow reversion to the long run trend, and leave it at that. Instead, using the illusion of control that comes out of their structural model, the CBO thinks they have not merely the mean, but the fluctuations tied down. Heck, last time we were in a recession, most economic forecasts were still predicting growth and had no clue we were actually in a downturn.  So, this recession in some sense will be unique like all the past ones, the exception being that it will be the one we actually saw coming (and was mild).

But a fluctuation in a forecast is very useful because if you predict growth like that, if it comes in worse than expected you simply move out the recovery over time and it looks like you saw it all coming (first rule of forecasting: do it early and often). If growth comes in better than expected next year you highlight how pessimistic you are (leaving those 4% growth years for someone else to explain, not that anyone gets called on projections out over 2 years anyway).

I understand why weathermen over predict rain when it is improbable: it sells, people prefer to hear a 20% chance of rain to a 5% prediction, even if the latter is more calibrated.  Thus, small probabilities for precipitation are over estimated in general. But the CBO is relied upon to make big decisions and not selling advertising, and they clearly are simply pulling numbers out of the air when they 1) forecast recessions and 2) forecast 5 years of above-average growth.

The pathetic thing is they know what they are doing, and how useful the down-up biased forecast is for managing ex-post rationalizations in real time. The first key to being a good quant is honesty, because when you start lying to others, you start lying to yourself, and then you are simply an articulate confabulating hack for whatever prejudice is driving your big picture.
Posted by Eric Falkenstein at 8:49 PM


This chart doesn’t show a debt/GDP decline it shows a debt held by the public/GDP decline.

Regardless of taxing and spending, when the Fed prints money out of thin air and buys up bonds the Treasury just issued (close to 100% on the long end at this point) there is less stock available for the public to buy and hold. Gross debt/GDP is going nowhere but up: