Match of the Century 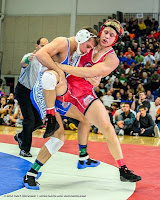 Kyle Dake wrestled David Taylor last weekend in a preseason match. Both are dominant college wrestlers, and they had a great match. Both were very cautious, and Dake won 2-1 in overtime (Taylor in blue, Dake in red, right). You can see it here.

Personally, I'm a Taylor fan. He goes for big moves more often, and I appreciate that. Sure, occasionally he gets pinned, but I prefer that type of style to the more methodical approach of Dake. I love guys who usually win big, risking the occasional loss, to those who never lose but do not dominate when they win. Their weight class has Tyler Caldwell of OSU as well, so this year should be very fun.

Posted by Eric Falkenstein at 7:57 PM

Rajat beat me to it.

Video taken down at that link, btw.

Or is it a skewness preference

Agreed, although I also tend to prefer matches in the medium to medium heavyweight classes. From a fan’s perspective, the lightweights tend to flit around like insects and the really big guys often lock-up like sumos without much ever happening during the match. The ants and elephants analogy is too extreme here but nonetheless the physics involved in a bout between two 130lb guys is different from a bout between two 180lb guys. I suspect that in terms of maximizing dramatic effect, there is some “optimal” human size in terms of strength vs. body weight which favors a particular blend of dynamics and maneuvers during match combat sports like wrestling.

Football is kind of weird now that I think about it in that it is a very aggressive, physical sport with a huge range of players in terms of size and body type on the field at once.