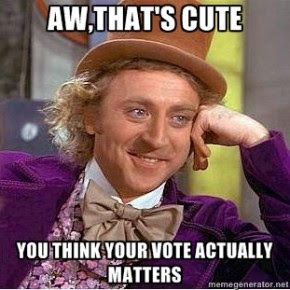 Ideally, politics is about coming up with a set of understood compromises on issues trading off redistribution and efficiency. As most people have instincts on the long run effects of their favored policies but no definitive proof, people tend to be get very frustrated and emotional discussing these issues because we don't like arguing about things we believe but can't prove. I believe a smaller scale and scope of government would increase welfare, but alas my proof does not fit in a blog post (sort of like Fermat's last theorem).

National politics is about convincing the demographic that votes for American Idol to agree with you.  When I used to teach at Northwestern University I occasionally asked what students thought about popular topics like  'free trade' or 'market efficiency'. Their opinions were so poorly articulated and founded, I stopped doing that. It did not help to have people riff on subjects they really didn't understand, the errors were so numerous and fundamental it simply was a waste of time.  I realized then that gaining their support would either rely on authority--believe me because I have these credentials--or slick salesmanship. Both methods are not good at converging upon truth. In the end I tried to explain some fundamental ideas showing why, given certain assumptions, one could think something was optimal, so the best case scenario was not definitive anyway.

In this environment it's sad that the great unwashed directly elect a person with the power to make decisions over whether we should spend another $800B, or choose judges for their biases (given smart lawyers, is not hard to do for almost any bias).  This is not a wise way to make policy. Unfortunately, alternatives aren't obvious, and certainly not popular. For example, something akin to a literacy test would enhance our voting competence, but would statistically discriminate against certain groups, and I'm doubtful it would be more enlightened anyway. The old belief of J.S. Mill that if we merely educated everyone we would agree and choose wise policies is clearly wrong.

It's a paradox that pure democracy leads to more concentrated power, something known by Plato and the US founding fathers. As collectives get larger--the USA, Roman Republic, Galactic Senate--power gets more concentrated in the President or Emperor. I think this is because when a state is small, an aristocracy/oligarchy is concentrated enough to work, but it doesn't scale. At a certain point the aristocracy is fragmented but the titular head retains his power,  which is then amplified by his new relative strength, making the legislative branch a veto at best, a patronage machine at worst.  The House and Senate remain more powerful than the President, but they seem to lose stature every decade.

But most importantly for this day, voting in big elections does not matter at all. Consider you live in Florida, which decides the presidential election. You cast the deciding vote, your candidate winning by 1 vote. In such a case, the stakes are so high that very good lawyers would be called in, and the better or more powerful lawyers would find the definition of what constitutes a legitimate vote such that your decisive vote would be irrelevant. That is, lawyers can use one of several metrics of voting, some of which will show their candidate winning, some losing, for any close election (just like polls generate different results depending on demographics). That's what happened in Minnesota, where the Republican was winning the senate race by 700 hundred votes, but the much stronger Democratic party in this state had a much more vigorous counsel helping them 'recount' the votes, and eventually they counted more for their Democrat.  In the improbable case your vote matters, it will be the lawyers and not an individual vote that makes the difference. So no vote matters. QED.
Posted by Eric Falkenstein at 9:14 PM

When democracy fails strong hands must step in - Just as Pinochet did in Chile.

I would hate to see the intellectual's 'final solution' for the 99.9% of the population he deems below him.

Do away with primaries. Go back to the good ol' days when the candidates were chosen in smoke-filled rooms by their party's leaders. That way, the disinterested masses will only have a choice between candidates with some cred (hopefully).

Satire? No at all. Pinochet's policies made Chile the most prosperous and stable nation in South America. When he was done he stepped down and re-instituted democracy. Unfortunately, brutality was required and at times was excessive. Yet America has never had a problem with initiating or participating in brutality, as our war-making suggests. Indeed, their is much hypocrisy on the left. We never hear a peep about the mass murders and famines, in say, Ukraine that were created by communists. Pinochet saved Chile and prevented a much larger humanitarian crisis.

It’s time to dust off constitutional monarchy and/or revert back to the original system where the states are strong and the federal government relatively weak (The national sovereign is called The United States of America not The United People of America for a reason).

This eliminates the “Us vs. Them” acrimony that gets worse by the day and which will eventually end violently. The feds collect just enough taxes for things like a suitable military and that which (and only that which) can’t be better accomplished at the state (or more local level) and then they spend the rest of their time cutting ribbons and going to parties. If you want more redistribution of wealth, public nudity and free drugs you go live in one state, if you want minimal government with few obstacles to free enterprise you go live in another state. 50 choices is a lot of choices.

What were some of the responses you got from your students at Northwestern when you asked about Free Trade?

Eric, your critique of our political situation is valid, perhaps even understating the shortcomings. At times, it seems too many of the greediest, the worst, and the most unscrupulous of men seek power. Yet, we have a form of government instituted by men who desired the scope of that government be constrained within certain bounds. Today one of our political parties is built on an expansive view of the proper scope of government, a view which would have been anathema to the founders of our country. With eyes wide open as to the faults of men, we do still have a meaningful choice. As Franklin famously urged, we should endeavor to 'keep the Republic'. Good people, rich and not so rich, bled to be free from the dictates of autocrats.

I agree that voting doesn't matter in this election. I feel stupid even doing it.

But what alternative are you offering? Is there a better way?
My girlfriend is Russian. I was asking her how ANYONE could vote for Putin when his dictatorial ambitions are so obvious. She answered very matter-of-factly that many people, especially in rural Russia, strongly believe that only a very powerful man can rule such a big and ethnically diverse country.

It's not the lawyers who will ultimately invalidate your vote, it's the guys with deeper pockets. Our ideologies have become so entrenched and steeped in billions of dollars that no one is willing to compromise, which is a fundamental pillar of the America governmental dream.

I don't think voting should be tossed away, or that literacy tests should be given to vote. I think believing and investing in Americans being more educated is the only answer. I'd like to think as a libertarian my fundamental belief in man as self-sufficient and decision-capable beings is enough to guarantee good government.

Now, let's get some basic re-investment in education and wage equality (related!) into our two-party system.... if only I knew where to start, those bastards.

The guys with the deep pockets hire the lawyers.

And what strain of libertarianism supports "wage equality"?

So Dr. Falkenstein, did you bother to vote or not?

Lot of people, on all sides, seem to think deep pockets is what matters in the end. If so why not bite the bullet and introduce formal plutocracy, and replace elections with (penny) auctions: anyone can make a non-refundable donation to the Treasury for the candidate of their choice (at all levels), and the one with the highest amount to their name on closing day gets the job. The amounts are published in real time to encourage further donations and solve the marginal voter problem (if everybody is rational, the difference between the first and second candidate is always 1 incremental donation, the voting stops when nobody is willing to make an incremental donation to flip the order, donations that make the amounts equal are not allowed). If markets as money weighted decision making mechanisms are efficient, it should produce a pretty optimal result. And it reduces the need for compulsory taxes by the amount the auctions bring in.

If anyone reading has a small country handy, could they please try and upload a report on SSRN after a couple of generations?

I disagree with your logic in the last paragraph. If it's not the last vote that matters, it's the vote that makes the margin just big enough that lawyers can't go after it. Power of your vote is the same either way (still very small).

Eric, please use your obscure movie references correctly: you have misused the word "Idiocracy". It is a de-evolution that arises from demographic trends where smart people have few children and idiots have many.
BTW, how many kids do you have?

I have 3 kids. And my reference was meant to riff off the movie, not follow it exactly. a X-cracy is a kind of rule. Idiocracy rule by idiots.