It's Useful to Actually Plan 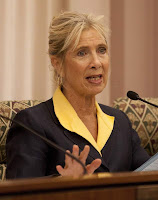 Charles' Murray's Losing Ground was that most incentives in life are negative, in that if you don't do X you will starve or freeze or whatever. Thus, you learn to be thrifty, nice, and hard working to simply get by. The most common complaint by businesses as to why they fail is that their  banker stopped lending or seized their collateral; if they just had more time things would have turned around.

Promising large pensions is one of those things that keeps increasing future liabilities, and if you simply plan based on cash flow--including borrowing--you will hit your constraint with probability=1. Bankruptcy seems to be the only realistic constraint.


Stockton Mayor Ann Johnston voted for these expensive measures when she served on the city council. 'We didn't have projections into the future what the costs might be…I learned that you don't make decisions without looking into the future'… 'Nobody gave thought to how it was eventually going to be paid for,' says Mr. Deis, the city manager.

Who knew?
Posted by Eric Falkenstein at 4:57 PM

They knew; they had the opportunity to know. All they had to do was ask the pension/employee benefits actuary for the cash flow stream that he was discounting to come up with the value of the liability.

It gores me, because there have been at least a dozen muni pension books exposing this issue for years.... just political garbage "We didn't know. Evil people hid this from us."

And the ones who thought they were clever, aiming for high pensions, are the ones who will be disappointed as they will have to give up some of their benefits.