Mother of all Metaphors Still Informs 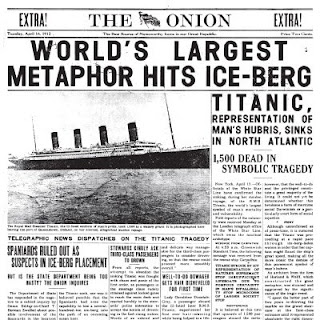 Writing about regulations related to the failure of the Titanic, Chris Berg makes an important point:

And regulated entities tend to comply with the specifics of the regulations, not with the goal of the regulations themselves. All too often, once government takes over, what was private risk management becomes regulatory compliance.

Case in point, when the 2008 crisis happened, instead of merely changing the priorities of the Fed, OCC, SEC, FDIC, or other existing regulatory bodies, the focus instead was on creating a new regulatory agency, the Consumer Financial Protection Bureau. Debates about regulations invariably center on more or less, rather than simple changes. Meanwhile, bank executives often confuse regulatory limits and guidelines with prudence. It's hard to see how one can really have confidence that this process really makes the system more robust.
Posted by Eric Falkenstein at 8:02 AM

Shout it from the house tops. If there was so much fraud in the making mortgages from 2005 to 2007, where were the local authority that prosecute fraud? In many case where new laws are enacted we do not need new laws just better enforcement of existing laws.

Is it an agency problem for the public if the regulators themselves are under the belief that regulation is unnecessary and a hindrance; and therefore, spend their time providing guidance to the regulated rather than enforcing statutory compliance?...

Can conservatives/libertarians provide solutions rather than repeatedly identifying a self-fulfilling prophecy?

I honestly interested in intelligent feedback, rather than ad hominen flames thanks

I don't think regulators countenance any noncompliance once they see it, so I don't think there is any more for them to do there. Madoff is a good example of a nonaction, but that was incompetence--what can you do, it's going to happen given these aren't the best the street can employ. They generally do wish to provide guidance where the law is ambiguous, which only makes sense. That is, if some activity is not clear, why not tell them beforehand that it is illegal or legal? The fact that most regulations become irrelevant and mislead those higher up executives who are in charge is precisely why we need less, rather than more, regulation. A libertarian principle, such as 'all power corrupts', is not self-fullfilling, but rather, descriptive

Beware of generalising the problems of financial industry regulation. In other industries it may be easier to get the industry buy-in when regulation solves a tragedy of the commons/race to the bottom kind of issue.